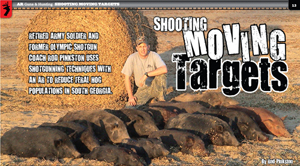 I retired from the Army after 24-years of military service. My primary job from 1999 through 2008 was to recruit and train the best Olympic shotgun shooters in the world for the U.S. Army Marksmanship Unit at Fort Benning, Georgia. In August of 2008, my Soldiers gave me the best retirement “gift” possible by setting four Olympic records and winning two Olympic gold medals in Beijing, China.

There is a great deal of wisdom and muscle memory gained from shooting 150,000 clay targets in the past decade. The same skills needed to shoot moving targets with a shotgun can be applied to running targets (inside 150 yards) with a rifle. If a hunter can learn to point a shotgun, they can be taught to point a rifle as well. My company was founded on this philosophy. Our JAGER PRO guides and guest hunters harvest 1,000 feral hogs annually applying these skills with a rifle and thermal optics at night. This article is dedicated to teaching effective shooting methods on moving targets. We will also demonstrate proper leads using thermal video viewed from the shooter’s perspective.

I need to emphasize two important points. First, hunters cannot confuse the methods used to control a feral hog or coyote (invasive species) with the “ethical” or “sporting” methods used to control game species. There is no closed season or bag limit on removing hogs or coyotes in most states. Farmers and landowners are NOT looking for sport hunters. They want competent individuals who are committed to investing the time and resources needed to legally solve their invasive species problem. The Department of Natural Resources considers these animals a nuisance for valid reasons.

Second, the most important reason to shoot a moving target is to become more efficient at hog and coyote control. Hunters are not harvesting enough hogs or coyotes to properly reduce populations in many states. We need to become more efficient management tools by harvesting higher numbers. Our challenge as hunters is to effectively control hogs and coyotes to the point where agricultural and predator damage is minimal. Another reason to shoot a moving target is to follow-up with a lethal shot after an unsuccessful first attempt at a standing animal. These animals are tough and it may be necessary to anchor them with a second bullet. We do not want a wounded animal to escape and suffer.

Hunters must understand lead in order to become proficient at movers. Lead can be defined as shooting ahead of a moving target so that the bullet and target intercept. In other words, you must shoot where the target will be when the bullet arrives. Leads are only necessary if targets move enough distance to change their position while the shot is in the air. It is not important for short range but crucial for distance and wide angles.

For example, a 60 yard shot will require half as much lead as a 125 yard shot and a 90 degree, broadside, right angle will require more lead than a 15 degree, quartering angle. This is the same reason it takes one foot of lead to break a high house target on station two and four feet of lead to break the same target at the same distance on station four of a skeet field. Speed must also be considered as coyotes running at 25 MPH will require more lead than a hog trotting 5 MPH at the same distance.

I could list the proper miles per hour (MPH) and feet per second (FPS) conversion formulas and confuse you with bullet flight times in milliseconds. Taking pencil to paper at known distances, speeds, angles, bullet drop, time of flight and wind direction to mathematically calculate proper leads is a “conscious” brain task. This information would be very necessary if you were engaging stationary targets at 300+ yards. But the variables to these equations do not matter at all when shooting a rifle at moving targets inside 150 yards. Close range hog and coyote control must become a “subconscious” task because the animals are quickly changing speed and direction.

For example, when a dove or duck rockets past you 39 yards away at 44 MPH, do you consciously calculate how many feet of lead it will take if you are shooting a 1290 FPS shotgun shell? No, your eyes quickly transfer the distance, speed and angle information to the subconscious part of your brain which sends a signal to your forward hand moving the shotgun in front of the bird. When your eyes recognize the proper lead, the subconscious brain sends another signal to your trigger finger. Shooting a rifle is no different.

There are four common methods for shooting moving targets.

Skeet or sporting clays repetition with a shotgun will help improve your sustained lead, swing-through and pull-away techniques. Just remember, shotgun leads at moving targets will be different than rifle leads at the same distance. Shotgun shells are travelling at 1200-1300 FPS while rifle bullets are travelling at 2500-2900 FPS.

Use the chart below to help determine proper lead for rifle practice:

The most important factor in becoming proficient at moving targets is PRACTICE. Your subconscious brain is like a six-inch computer between your ears. You must give your computer ample information with repetitive distance, speed and angle input for positive and negative feedback. Your brain will learn to make last second corrections with enough repetition and experience. Nothing beats a rifle range with variable speed moving targets to learn various distances and angles.

Gun fit is also very important. Mount scope to rifle with the proper eye relief. When the rifle hits your shoulder, your master eye should be directly behind the scope with a full field of view to acquire the proper sight picture immediately. If you don’t shoot with both eyes open, start now. Shoot a rifle at moving targets just like a shotgun. Your master eye cannot focus on both target and reticle at the same time. Your vision must be locked on the target downrange with only your peripheral vision seeing the reticle.

Always practice mounting with an unloaded rifle. Set your scope to the lowest magnification and mount to a stationary object. Learn to look at an object with both eyes, mount the rifle, and see the object immediately centered in the scope with one natural motion. Moving targets require a smooth swing before the shot and a natural follow-through afterward. Practice your mount, swing and follow-through by tracking the horizontal line where a wall and ceiling meet. Repeat this task 50 times daily for proper muscle memory.

Never take a running shot unless shooting conditions dictate the proper background to stop a bullet without any buildings, livestock or other hunters down range. Always take your lead from the vertical center of the animal’s head or shoulder maintaining a smooth swing and follow-through. Squeeze the trigger gradually as you are aligning the sight picture without slowing or stopping your swing. Consciously follow-through after the shot and observe the bullet hitting the target. It is always better to err on too much lead than not enough.

Understanding leads combined with practice and experience will produce results beyond what you thought were possible. You will harvest more hogs and coyotes when you are consistent at running shots. Our goal as hunters is to become more effective management tools by reducing hog and coyote populations and limiting crop and predator damage across the United States. Bottom line—moving targets can be harvested cleanly if hunters possess the proper shooting skills.

Rod Pinkston is the founder and owner of JAGER PRO® Hog Control Systems based in Columbus, Georgia. It is the first company to successfully apply thermal imaging equipment and military technology to effective feral hog control in the United States. Rod is a published author and expert of the latest technology, tactics and research in the industry. He can be contacted at 706-718-9789 or Rod@jagerpro.com.