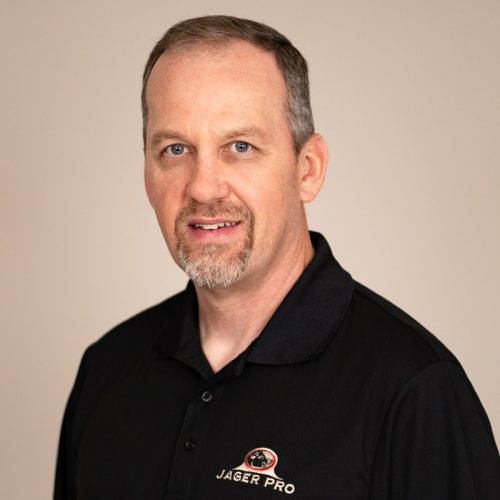 JAGER PRO® Founder & CEO, Rod Pinkston, earned his living as a Soldier for 24 years. He retired from the United States Army Marksmanship Unit (USAMU) Olympic Shooting Team at Fort Benning, Georgia after his Soldiers won two gold medals at the 2008 Olympic Games in Beijing, China. The 2008 Games were the first time U.S. shooters earned four shotgun medals in the history of Olympic shooting.

Rod lived in Germany during two separate Army tours for a combined total of seven years and earned the coveted “Jagdschein” shooting European boars in Germany, Poland and the Czech Republic. Research and knowledge gained from working with German Jagermeisters and Forstmeisters helped him develop more efficient feral swine control technology and methods for the United States. Employing retired Soldiers, JAGER PRO® is the first private company to develop military-grade technology and methods to harvest 100,000+ feral swine annually in the United States.

Rod is a member of the National Wildlife Control Operators Association, inventor of the M.I.N.E.® (Manually Initiated Nuisance Elimination) Trapping System (five approved patents), creator of thermal hog control methods in the United States and host of the “JAGER PRO®” television show on RFD-TV. His remote-control trapping and thermal shooting footage were the first to appear on national television and YouTube. He is an expert of the latest high-volume hog control methods and technology in the industry and author of the Integrated Wild Pig Control® Training Manual. 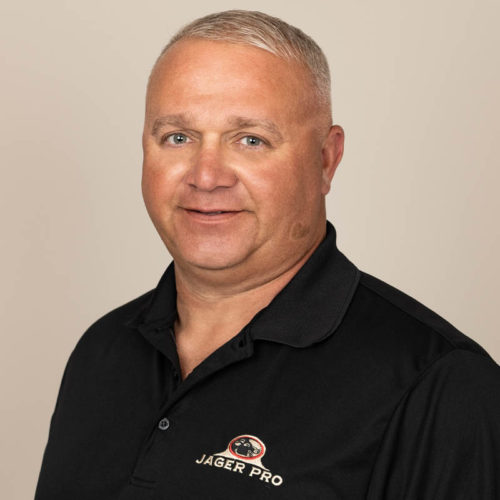 Chris Monhof is a native of Columbus, Georgia and retired as a Chief Warrant Officer 3 in 2009 after 22 years of service. He was deployed 44 months in support of three Operation Iraqi Freedom missions. As an Artillery Targeting Officer, he made strategic decisions in relation to thermal ground reconnaissance and air to surface strikes on enemy targets.

Chris owns Southern Hog Control, LLC and has a lifetime of experience shooting wild hogs in the swamps and backwoods of Fort Stewart and Fort Benning, Georgia. He has been conducting thermal hog control missions with JAGER PRO® since 2009. 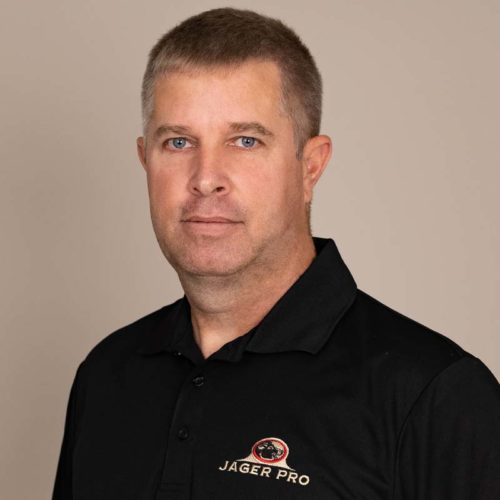 Lance Dement retired after a 24 year Army career and served at the US Army Marksmanship Unit (USAMU) for 20 years. He earned a position on the US Olympic Team and won the US National Championships in 10 meter running target and 50 meter running boar. Lance also competed on the USAMU Service Rifle team, winning the 1000 yard Wimbledon Cup (scope) and Leech Cup (iron sight) and was a firing member on five record setting teams. He was awarded the Presidents Hundred Tab, International Distinguished Badge, Distinguished Rifleman Badge and Distinguished Pistol Shot Badge. He is a member of an elite group to have earned all three distinguished badges.

Lance became the Director of Trapping Operations in February of 2012. He is the owner of Killin’ Time Outfitters LLC, specializing in nuisance wildlife control and removal. Lance has been Trapping and Shooting hogs on Fort Benning for the past 15 years. 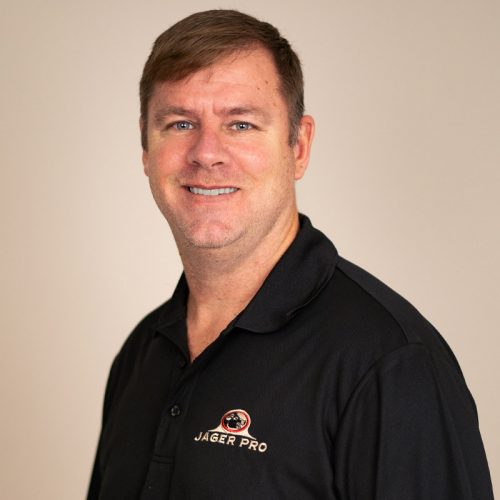 Clint Housel retired as a Company First Sergeant after 22 years of service. He was awarded the Bronze Star Medal (BSM) & Combat Infantryman’s Badge (CIB) in Afghanistan during a 24 hour engagement against enemy forces without any friendly casualties.

Clint became the director of camera operations in 2014 after performing feral hog control missions with JAGER PRO® since 2012. 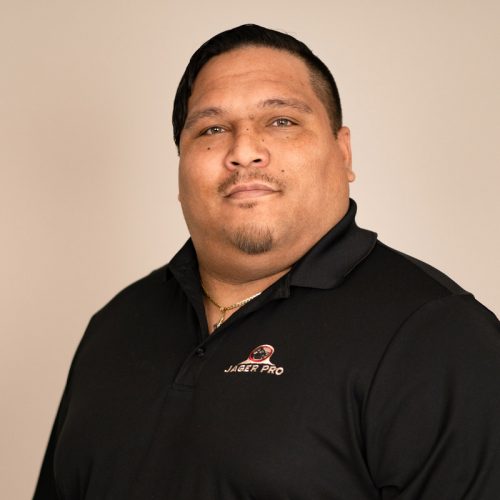 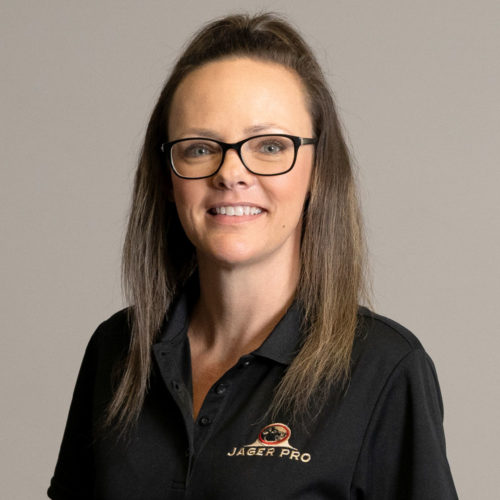 Nicole Scrivener, camera specialist and newest JAGER PRO® member, comes to us from Canada, where she was born and raised. She has spent the last 16 years living in the United States as a dedicated military wife and mother. Her and her family have lived in the Columbus, GA, area for the last five years and decided to retire here after her husband's 21-year military career. Along with a marketing degree, Nicole has extensive retail management and customer service experience, having spent the last five years managing a fast paced, specialty retail store. She will bring a fresh approach to the JAGER PRO® team. 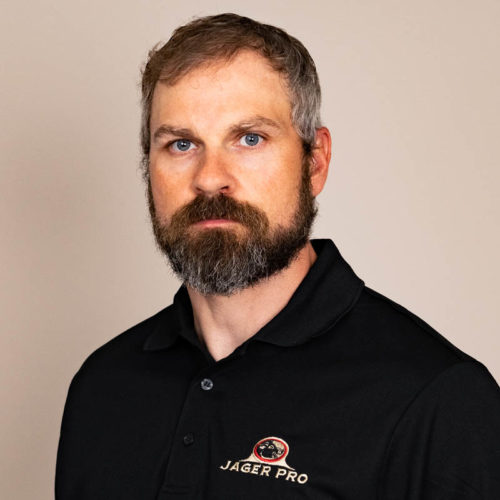 Josh Vigeland retired after a 21-year Army career. As an Armor Crewman, the M1A2 Abrams used mobility, ﬁrepower and shock eﬀect to close within and extinguish enemy forces. His deployments include Macedonia, Iraq, and Afghanistan. He served as a One Station Unit Training (OSUT) drill sergeant, tank commander and tank instructor. Josh served in the 1st Infantry Division, 11th ACR, 172nd Stryker Brigade Combat Team, 10th Mountain Division, 4th Infantry Division and the 194th Armored Brigade. Josh and his wife Jessica have 4 children: Lauryn, Gryﬃn, Grady, and Gage. He enjoys many outdoor activities including hunting, ﬁshing, and snowboarding. Josh started big game hunting at the age of 12 with his father and has been passionate about it ever since. 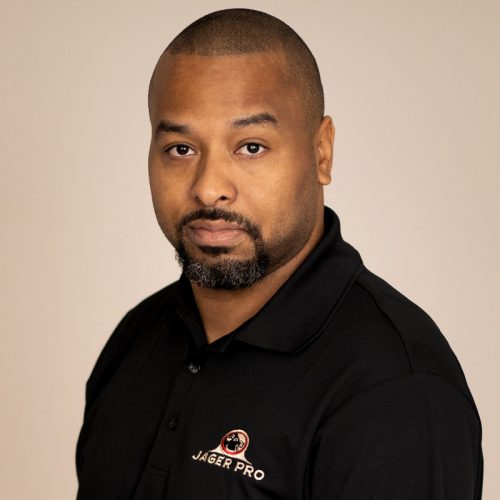 He began his creative career with Raycom Media in Columbus, Georgia as part of the production team responsible for newscast graphic creation. He was then promoted to Production Manager making him at that time the youngest manager in the company and the first African American manger in Raycom Media history.

During his tenure as Production Manager, he earned both Bachelor of Science in Business and Master of Business Administration Degrees. He was then promoted to Regional News Operations Manager for the southeastern region. He has been at the forefront of various high school and college media programs lecturing on both levels.

He currently lectures as part of the University System of Georgia teaching new media concepts and visual production. Through his media production nonprofit, he regularly holds workshops and client consultations to help organizations utilize integrated media as a targeted messaging tool.

Chris loves working with technology and mentoring new creatives however, he is most excited about finding innovative ways to tell stories. 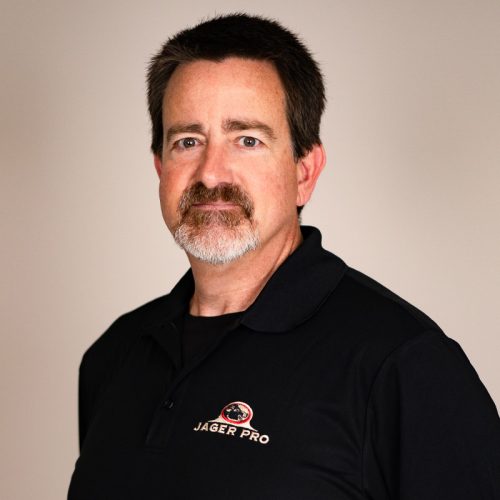 Art started his career utilizing his Criminal Justice degree serving over ten years as a Special Investigator with the Muscogee County District Attorney’s Office in Columbus, Georgia. He then transitioned into the private sector as a Corporate Security Investigator for Powertel, a regional cellular phone company. In 2001, T-Mobile acquired Powertel and Art was promoted into the position of Manager of Investigations where he led a group of investigators and analysts conducting investigations regionally in the Southeastern United States as well as all outsourced call center investigations and shipping theft investigations companywide.

After eight years, he left the cellular business to apply his legal experience and lifelong love of hunting and all things outdoors for a new career in the Outdoor Industry at Jordan Outdoor Enterprises, better known as Realtree. As a Licensing Account Manager at Realtree, Art managed the business development, relationship building and account management for many high-profile brands such as Nike, John Deere, Carhartt, Old World Industries/Peak Automotive, Nikon, 5.11 Tactical, as well as several prominent brands under the VF, Jarden, Wolverine Worldwide umbrellas and many more. After a very successful almost twelve-year career at Jordan Outdoor’s, Art took all of this experience and knowledge and founded his own consulting business, The Two Nine, LLC. This venture affords Art the ability to choose his clients assessing where his expertise can most effectively benefit their growth and needs. Art’s first two clients were Outdoor Industry Veteran Michael Waddell and his Bone Collector™ Brand. This was soon followed with client’s three and four with fellow Bone Collector’s Travis “T-Bone” Turner and Nick Mundt.

In August 2019, Art was introduced to JAGER PRO® Founder and CEO, Rod Pinkston. After several meetings, both agreed that there were synergies worth pursuing with Rod inviting Art to start consulting with JAGER PRO®. Art now manages their marketing efforts as well as the performance of any special tasks as assigned by the CEO. He is very honored and excited to be working with a group of such well-respected and experienced retired soldiers. 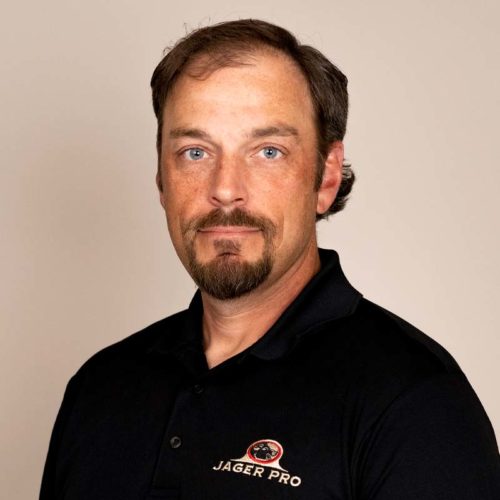 Chad DeFrates retired from the Army after 20 years of military service. He was assigned at Fort Benning, GA as a Calvary Scout Instructor for 6 years. Chad also served with the 101st Airborne Division, the 4th Infantry Division, and the 3rd Armored Calvary Regiment, with a total of 48 months of combat experience.

Chad was an avid outdoorsman and accomplished hunter from his youth, becoming interested in feral swine during his time stationed at Fort Hood, TX from 2007-2012. His Sniper and Recon training were an asset while honing his skill and knowledge of feral swine while stationed at Fort Benning from 2012-2018 as well.

Chad joined the JAGER PRO® team in 2018. He was an experienced operator of the M.I.N.E.® trapping system and accomplished shooter with multiple thermal optic and firearm configurations.