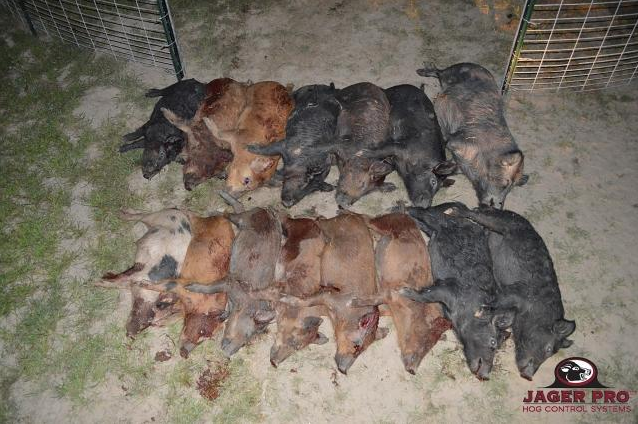 The  I.C.E.® Cam photo shows the month is March and the overnight temperature is 70°F. We have set up a automatic hog feeder as a food source. Sounder Intel verifies one adult sow, 16 subadults and six orphaned juveniles for a total of 23. We have determined one trained and certified Hog Control Operator™ will employ the trapping process using one M.I.N.E.® Trapping System. Our performance standard is 100 percent success which means we must remove all 23 pigs expending the least amount of fuel, time, labor and money.

Dates of the Pea Field captures were 25 & 28 March 2017. We effectively captured one adult sow, 14 subadults and six juveniles expending 3.50 labor hours. The sow was pregnant with five fetuses. ‘Split Ear’ was removed from Mud Puddle while Goliath #3 and the surviving black boar were removed from Pea Field North on 28 March 2017. Hamp and the surviving red boar were removed from Pea Field West on 31 March 2017. The shooting events expended 16.00 labor hours. Harvest Efficiency Report column totals for Episode 11 verify 31 pigs were impacted in six events expending 19.50 hours of labor which equated to almost 38 minutes of labor per pig.

We removed all 23 targeted pigs for a 100 percent removal success rate. Therefore, we accomplished our performance goals, using a trained and certified Hog Control Operator, by trapping and shooting during winter months, using our M.I.N.E.® Trapping System and thermal scoped rifles. We were successful in harvesting the surviving boars plus three additional mature boars and prevented five fetuses from being born. The total number of pigs impacted during this mission was 31.

Be sure to tune in for the next episode of JAGER PRO® on RFD-TV. Check local listings for availability near you or visit RFD-TV for previous episodes.