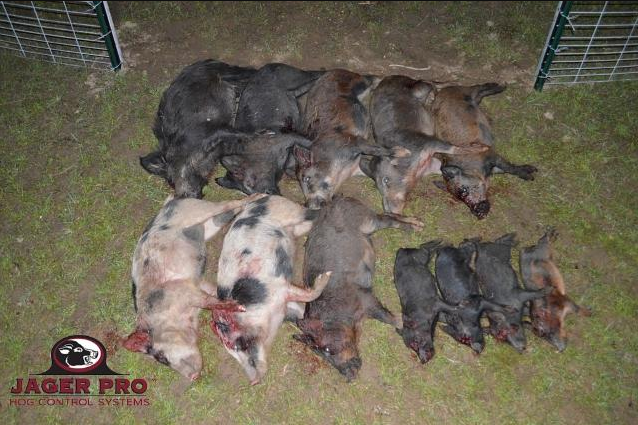 The I.C.E.® Cam photo shows the month is March and the overnight temperature is 70°F. We have set up an automatic hog feeder as a food source. Sounder Intel verifies eight adults and four juveniles for a total of 12. We have determined one trained and certified Hog Control Operator™ will employ the hog trapping process using one M.I.N.E.® Trapping System. Our performance standard is 100 percent success which means we must remove all 12 pigs expending the least amount of fuel, time, labor, and money.

The camera intel on 08 March 2017 verifies the first time all four boars fed together at Clay Pit and the day our Hit List was formed. Black Leg and Old Red left Clay Pit after I removed Triple B, Big PC within two weeks of the sounder capture. I locate Black Leg nine days later at the 442-food plot a mile and a half from Clay Pit. It takes two more months to locate Old Red at Mud Puddle, a mile northeast of Clay Pit. D-27 It took 90 days (08 March – 10 June) to remove all four boars from the Hit List.

We removed 12 of 12 targeted pigs for a 100 percent hog removal success rate. Therefore, we accomplished our performance goals, using a trained and certified Hog Control Operator, by trapping and shooting during winter months, using our M.I.N.E.® Trapping System and thermal scoped rifles for hog hunting. We were successful harvesting five additional boars. The total number of pigs impacted during this mission was 17.

Be sure to tune in next week’s episode of JAGER PRO® on RFD-TV, next Tuesday at 9:30 pm ET (8:30 pm CT).  Check local listings for availability near you and enjoy the episode promo.