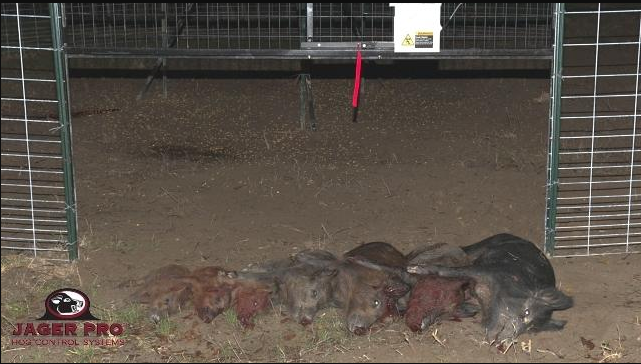 The I.C.E.® Cam photo shows the month is February and the overnight temperature is 54°F. We have established an automatic feeder as a food source. Sounder Intel verifies an adult boar, two adult sows and twelve juveniles for a total of 15. We have determined one trained and certified Hog Control Operator™ will shoot the boar with a thermal-scoped rifle and employ the trapping process using one M.I.N.E.® Trapping System on the sounder. Our performance standard is 100% success which means we must remove all 15 pigs expending the least amount of fuel, time, labor and money.

Date of the first Fountain capture was 23 February 2017. There were two subadult boars, four gilts and one adult sow. Only seven of eight were effectively captured for 88% success expending 5.25 labor hours expending 45 minutes of labor per pig.

Date of the second Fountain capture was 24 February. There were two juvenile boars and four gilts.

The crippled boar was removed from Fountain on 27 January. The shooting event expended 1.5 labor hours for 90

We only removed 14 of 15 targeted wild pigs for a 93% removal success rate, including the crippled boar. Therefore, we failed at our performance goal by allowing the black sow to live. Now we must determine which variable failed so we are able to make the necessary changes needed to succeed on the next mission. One could argue the past three years of using less efficient, portable box traps has previously educated several adults like the black sow. If so, the Mission Assessment would fail the People and the Product because the landowner selected a portable box trap, educating pigs to avoid metal contraptions on his property.

But I cannot shift blame during this mission because the Hog Control Operator™ was a No Go. I failed to take advantage of the black sow’s only mistake at 1945 on 19 February when she entered the trap for at least 60-seconds. The trapping process provided a valid opportunity for a whole-sounder capture using our MINE Trapping System. I assumed she would react a certain way instead of verifying her location with the technology in my possession.

Be sure to tune in next week’s episode of JAGER PRO® on RFD-TV, next Tuesday at 9:30 pm ET (8:30 pm CT). Check local listings for availability near you and enjoy the episode promo. For more hog trapping videos, click here or visit our Youtube page!