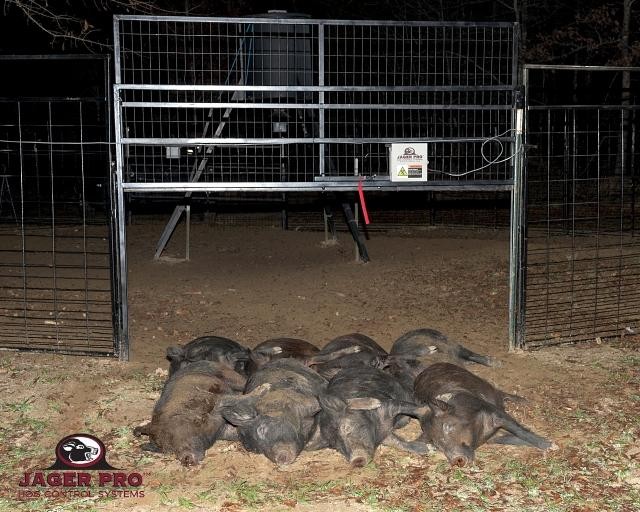 The I.C.E.® Cam photo shows the month is February and the overnight temperature is 57°F. We have established an automatic feeder as a food source. Sounder Intel verifies eight adults and zero juveniles for a total of eight. I’m fairly certain there are four boars and four pregnant gilts.

We have determined one trained and certified Hog Control Operator™ will employ the trapping process using one M.I.N.E.® Trapping System. Our performance standard is 100 percent success which means we must remove all eight pigs expending the least amount of fuel, time, labor, and money.

Date of the northern neighbor’s capture was 09 February 2017. There were four adult boars and four adult sows. All four sows were pregnant with 19 fetuses removed during necropsy. All eight adults were effectively captured for 100 percent success expending 2.75 labor hours for 20.63 minutes of labor per pig.

However, we prevented 19 fetuses from being born which would have tripled the sounder size within two months. We have determined it is far more efficient to euthanize pigs prior to birth and the reason pregnant sows are considered high-value targets. Adding 19 fetuses to our removal efficiency reduces labor for 27 euthanized to only 6.11 minutes of labor per pig.

We captured eight of eight targeted wild hogs for a 100 percent capture success rate. Therefore, we accomplished our performance goals using a trained and certified Hog Control Operator™ by trapping during winter months using our M.I.N.E.® Trapping System. We were successful harvesting the black dominant boar plus preventing 19 fetuses from being born. The total number of pigs impacted during this episode was 28.

Be sure to tune in next week’s episode of JAGER PRO® on RFD-TV, next Tuesday at 9:30 pm ET (8:30 pm CT). Check local listings for availability near you and enjoy the episode promo.