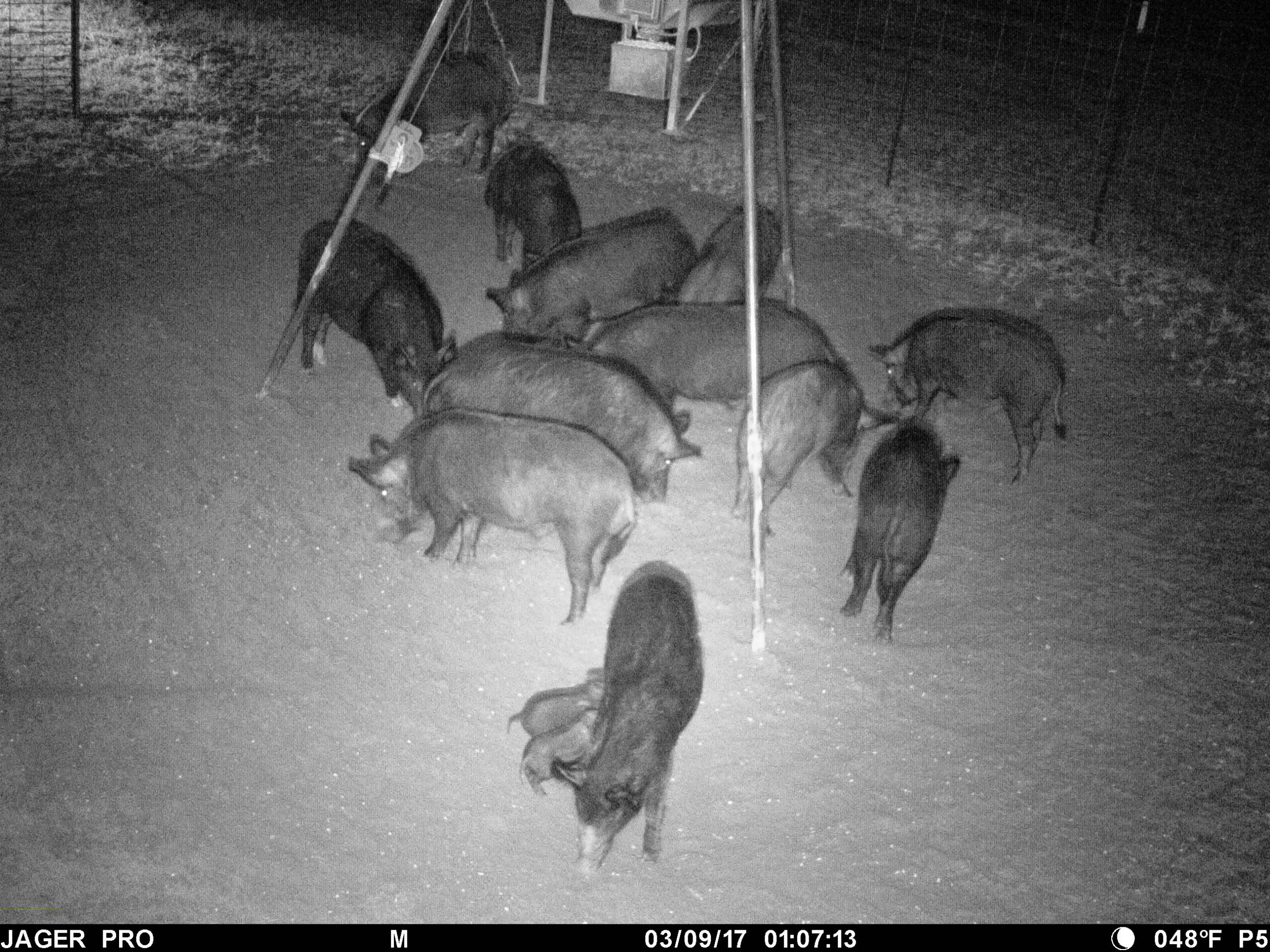 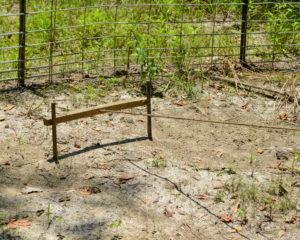 Trip wires and root sticks are basically a rope, wire or line connected to the gate and triggered by pigs as they feed or root the ground for bait. Those trusting the trip wire and root stick theory believe maximum capture results are obtained by heavy baiting at the back of the trap providing enough delay to allow multiple pigs inside the trap enclosure before pigs trigger the gate closed. The following video titled, Gate Triggering Mistakes will demonstrate three examples how trip wires would have missed 16 of 38 hogs captured for a horrendous 42% failure rate. Trapping cannot effectively reduce population densities using methods and equipment which only produce 58% success. 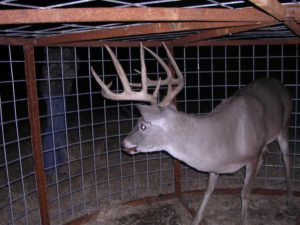 Trip wires can be easily triggered by non-target species such as deer, raccoons, squirrels and turkey. Trip wires and trigger sticks are very time consuming and costly methods as land managers must physically check traps daily (by law) for activity. There is no guarantee of whole-sounder success using trip wires as pigs control when the gate is triggered. A partial sounder captured at dusk will spoil the trap enclosure with urine and scat all night while vocalizing distress to any other pigs on the property. The negative result is a ruined trap location with local pigs newly educated to the trapping process. 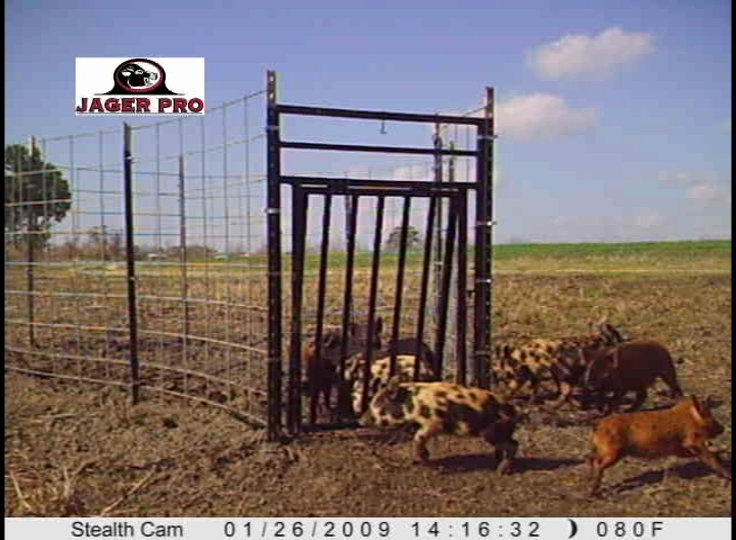 This photo demonstrates a trip wire capturing only six of 11 piglets resulting in 55% capture success. Almost half the piglets were educated to avoid future metal contraptions by this failed attempt. 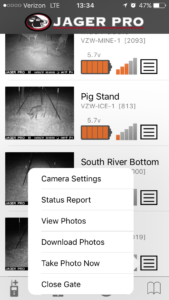 The JAGER PRO® M.I.N.E.® camera allows a cellular remote control trigger and is the latest innovation for efficient trapping success. Photos are transmitted from our wireless camera when motion is detected at the bait site and sent to the user’s cell phone, tablet or computer using the JAGER PRO® App. Optimum success is achieved by verifying the entire sounder is feeding inside the trap enclosure via the transmitted photo. Non-target species are not captured since a human makes an educated decision to close the gate.

This method and technology saves fuel, time and labor allowing 24-hour surveillance without wasting daily travel time and expenses to multiple bait or trap sites. This approach demonstrates whole-sounder removal within six days of building the trap enclosure at most bait sites and allows land managers to immediately euthanize feral hogs to prevent soiling the trap overnight with urine and scat. Also, user generated photos are legal proof the traps are checked daily and fully operational.

The past three “Hog Trapping” blog articles (TRAP & GATE SELECTION, PANEL SELECTION and TRIGGER SELECTION) systematically explained the various products available and then quantified the most efficient selections based on data documented during the last decade of our research and field experience. We combined the most efficient trap size, trap shape, gate design, panel design and trigger methodology together to create our Manually Initiated Nuisance Elimination® (M.I.N.E.®) Trapping System. 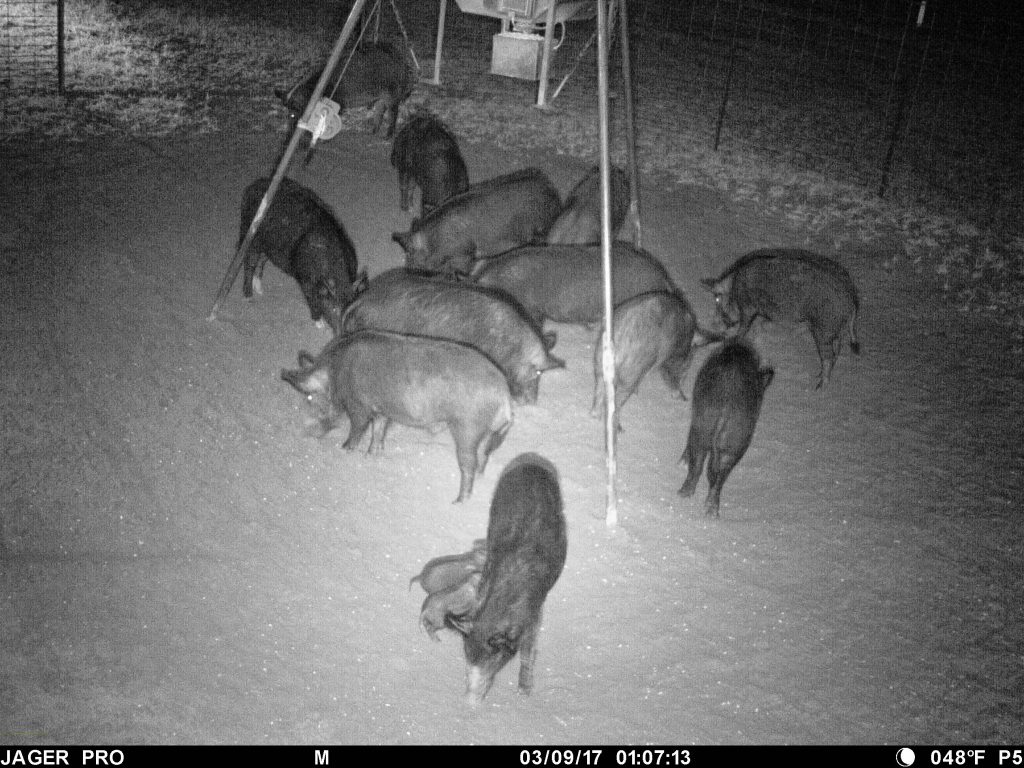 The JAGER PRO® M.I.N.E.® Camera allowed the user to verify all 12 adults were feeding inside the trap enclosure prior to triggering the gate closed. This methodology resulted in 100% capture success and did not educate any wild hogs to the trapping process as the entire sounder was captured at one time.

Future trapping blogs will focus on training people to properly implement our effective trapping process using the M.I.N.E.® Trapping System product to achieve the stated performance standard of “100% removal of the entire sounder spending the least amount of fuel, time and labor.”