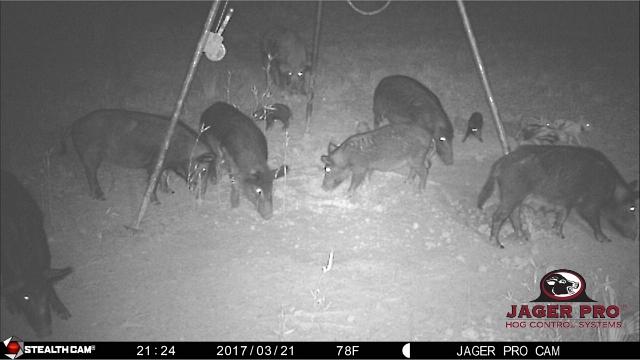 Our weekly recon provides the intel needed to plan the mission so I’ll take you step-by-step through the planning process this week. Camera utilized was a JAGER PRO® I.C.E.® Cam. The photo shows the month is March and the evening temperature is 66°F. We have established an automatic feeder as a food source. Sounder one intel shows two adults and two juveniles for a total of four.

Mission planning is complete. Now we must efficiently execute the mission.

The information contained in the Harvest Efficiency Report is used to measure and assess our training, methods, equipment, technology and return on investment, so it is very important the data is accurate. The date of the Clay Pit capture was 23 March 2017. Sex of the juvenile piglets was three boars and three gilts. The subadult gilt was not pregnant, but the four sows revealed 28 fetuses during necropsy. All 12 were captured for 100% success expanding 2.75 labor hours.

The Poland China sounder at Camp was captured on the same date with two sub-adult gilts, one adult boar and one adult sow who was pregnant with four fetuses. 4 of 4 capture for 100% success that required 5.75 labor hours. It took 1.5 labor hours times two people to build the permanent trap enclosure using our 16-foot-long 18-60 trap panels with T posts. The 5.5 labor hours expended during capture was divided equally between both two sounders.

It required 9.25 labor hours to shoot one of two boars on 10 June at mud puddle.

Harvest Efficiency Report column totals for episode two show 17 pigs were removed from this property in three events expending 17.75 hours of labor which equated to almost 63 minutes of labor per pig. However, I would like to bring attention to the fact that 32 fetuses were prevented from being born, due to our efficient trapping operations. The sounder population would have tripled within months if we had not intervened.

It is far more efficient to euthanize pigs prior to birth. For this reason, pregnant sows are considered high-value targets. Especially during the winter months of January, February and March, which is an annual farrowing peak for sows. A whole-sounder approach, targeting all age classes at the same time, is critical to long-term control. Too many hog control plans fail because people do not understand this important concept.

Watch what happens when we add the fetus numbers to our removal efficiency. Trapping labor hours dropped to 10.63 minutes per pig. D-32 Let’s compare numbers between both reports. Our harvest numbers increase from 17 pigs to 49 (which is a 188% increase) while our minutes of labor per pig decreases from 63 to only 22 (which is a 65% decrease).

Each week we must make a mission assessment to measure the selected people, process and product against the performance standard. We captured 16 of 16 targeted pigs for a 100% capture success rate. Therefore, we accomplished our performance goals, using a trained and certified Hog Control Operator™, by trapping during winter months, with our M.I.N.E.® Trapping System. We were successful harvesting the red Poland China boar plus preventing 32 fetuses from being born. By definition, our integrated wild pig control model eliminates escapes, education and reproduction. The total number of pigs impacted during this episode was 49.

There has been little research to quantify crop damage on a per pig basis. The only peer-reviewed and published data regarding crop damage is research produced by Mike Bodenchuk in 2011. He estimated damage at $389.57 per pig to agricultural crops only. These research results are a conservative estimate as no benefits to environmental processes were included in the calculation. We believe savings to wildlife, wetlands and watersheds exceed those to crops, but his research put zero dollars towards those benefits.

Be sure to tune in next week’s episode of JAGER PRO® on RFD-TV, next Tuesday at 9:30 pm ET (8:30 pm CT). Check local listings for availability near you and enjoy the episode promo.