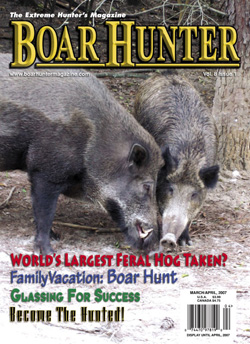 Hog hunters in the United States are truly blessed. We enjoy year-round shooting seasons with no bag limit in most states. All other large animal shooting seasons are limited to a few months during the spring or fall. Those shooting strategies are focused around the “rut” and the “strut”. But tactics which work so well in November will not usually be productive in April. Wild animal movement times and their daily activities change with the seasons and food supply.

This concept gives our year-round sport a unique challenge. Hog hunters must identify and understand seasonal habits and learn to adapt their shooting strategy to be effective management tools all year. My goal is explore this subject in upcoming articles and share some data which I hope will increase our monthly shooting success.

Feral hog research was conducted at Fort Benning, Georgia from August 2004 through May 2005. Digital game cameras used on sixteen feed stations captured over 8200 photographs during this ten month period which resulted in 511 different sightings of feral hog groups. A sighting was defined as all photographs taken of a group over a 12 hour period. The charts below indicate the time each group was first sighted. Cameras were set with a two minute delay between pictures in order to acquire multiple group photographs to assist with identification. Adults were recorded by sex unless sex could not be determined.

This data was only collected for one year, but revealed some very interesting trends in these heavily hunted populations. 8200 digital pictures illustrated one in three odds of seeing tuskers during daylight hours. The least amount of activity took place between 1100 and 1600 hours which would signify hogs were in dense bedding areas during the day. Clearly, peak movement began at dusk or later. Hogs definitely rely on their nose for food and were obviously secure foraging at night. They are also intelligent enough to associate the darkness with fewer human encounters. Estimates indicated approximately 70% of the sightings were nocturnal and only about 30% began during daylight hours. There seemed to be slightly higher morning activity during the fall season. Perhaps due to less shooting pressure from the summer months and an increased mast food supply in October.

The majority of wild hogs were killed between October and January. This corresponded directly with deer season and an increase in the number of hunters on Fort Benning. A substantial amount of acorns and hickory nuts were available during October providing a food source full of fat and protein. Lone boars were responsible for almost 42% of the digital photographs and were harvested almost twice as often as sows. Possibly because they have larger home ranges and are more likely to come across hunters. Their larger body sizes and tusks also made them a preferred trophy target.

We must identify and understand seasonal food habits and movement patterns to be successful year-round hunters. Oak and hickory hardwood bottoms were great fall locations. But food source changes dictate a change in our winter, spring and summer shooting strategies to sustain effective management. Future articles will reveal monthly stomach content research to help us identify the types of food sources ingested by wild hogs year-round. We will also track movement patterns from sows fitted with Global Positioning System (GPS) collars. Technical advances in infrared devices derived from the military will vastly improve our night shooting techniques. I’m confident the knowledge gained from Auburn University and the U.S. Army will better educate us about our quarry, simplify our efforts and increase our year-round shooting success.

I wish to give credit and thanks to Laura B. Hanson for the research and graduate thesis submitted on August 7, 2006 for her Master of Science Degree at Auburn, Alabama. Special credit to Bill D. Sparklin and D. Buck Jolley whose research data was also used in the thesis. Special thanks to Auburn University’s School of Forestry and Wildlife Sciences and Fort Benning’s Conservation Branch.