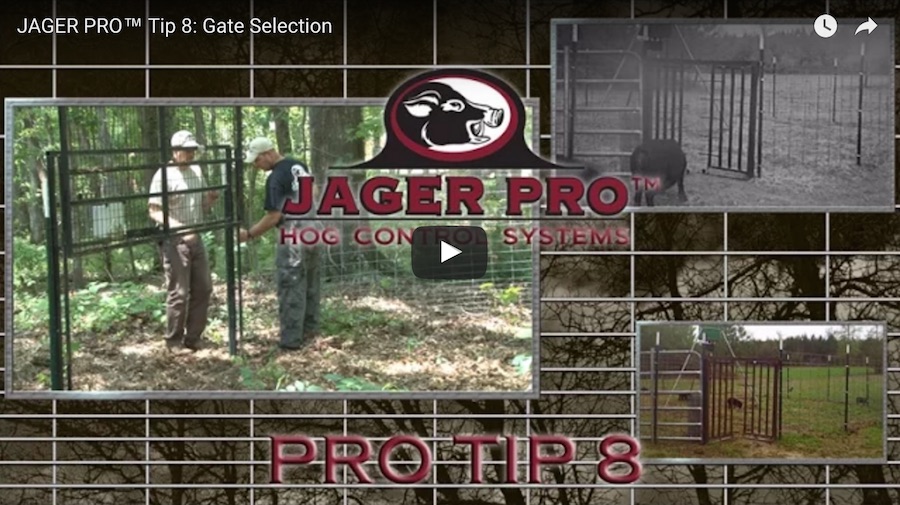 Trap gates come in a variety of widths, sizes and styles. Standard gates are built three feet wide by three feet tall but we do not recommend them because these devices only capture juveniles and uneducated adults.

This is a popular continuous catch gate design used by many inexperienced trappers. Those trusting this continuous catch theory believe feral pigs will continue to enter a closed, one-way trap gate. But landowners should make informed gate selection decisions based on actual results. Here, only 8 pigs were captured out of 26 for 31% success. This means 18 pigs were educated to avoid future metal contraptions while continuing to breed and overpopulate.

The example below demonstrates two juvenile pigs making a single attempt to enter a root-style gate before leaving the area.

A saloon-style gate is another example of the continuous catch method. These four adults used the food source on a daily basis until we partially closed the gates to view their reaction. They made an attempt to enter then walked around the trap to make another attempt two minutes later. Continuous catch gates captured 0 of 4 adults for 0% success. The juveniles, however, had no problem entering the saloon gates. The continuous catch theory only produced 3 adults at 20 separate trap sites. Our research demonstrated uneducated juveniles were more likely to enter one-way trap gates than adults.

Research demonstrates higher capture rates are achieved when pigs are already inside the trap enclosure before the gate closes. Survivors become trap shy and will replenish the population with more intelligent offspring.

Our goal is to share Integrated Wild Pig Control® methods and technologies allowing landowners to better control feral pig populations on your property.