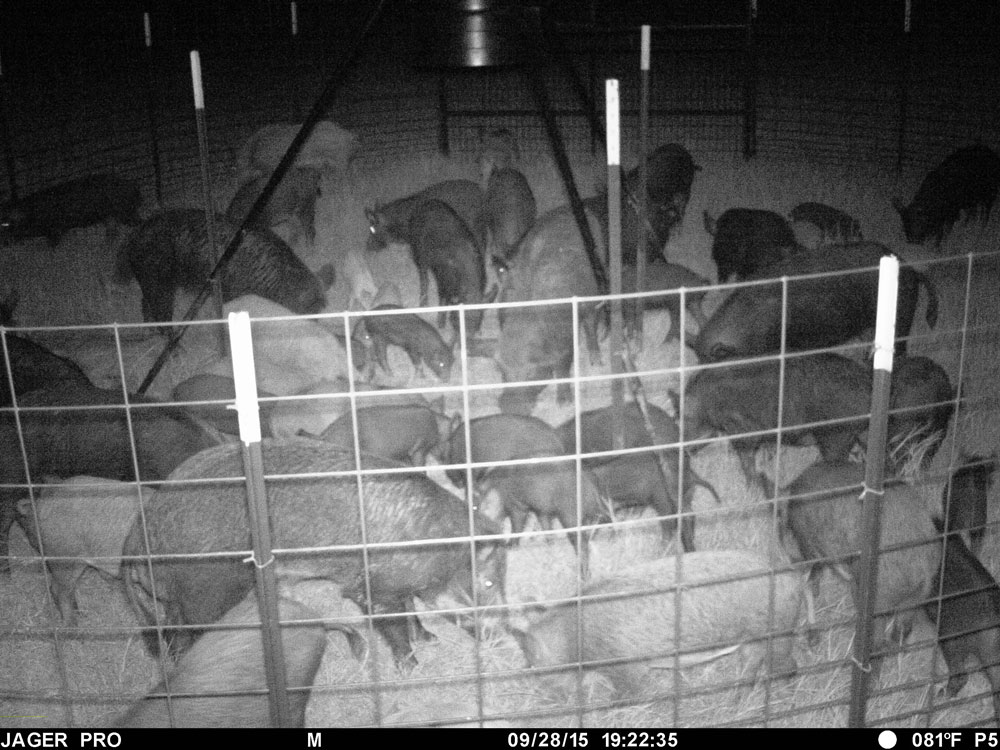 This pictorial article will focus on implementing an effective trapping process using the M.I.N.E.® Trapping System to achieve whole-sounder removal. We will demonstrate a Texas farmer following our Capture Success Matrix® to remove 120 feral pigs from his hayfield in one week.

The key to achieving IWPC® performance standards is to incorporate a process whereas the population dynamics and education level of each individual sounder dictates the time period between each step. This information is based on photo and video observations from the bait site. 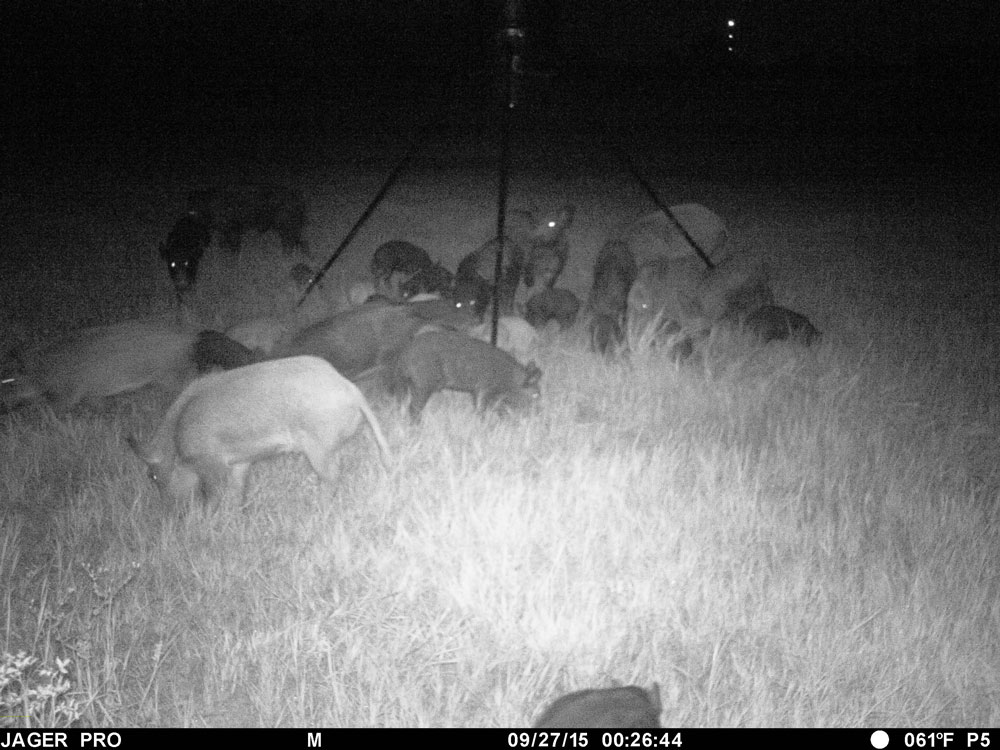 Each bait site should be fitted with an I.C.E.® camera to provide immediate reconnaissance photos to a cell phone, iPad or computer. All feeders should also include a trail camera since video footage produces more detailed intel than photos alone. The goal is to quickly determine the total number of sounders, total population of pigs within each sounder and number of adults vs. juveniles per sounder. Mount cameras at the target area at least six feet above ground level using a T-post and T-post camera mount to ensure the camera has the correct angle to trigger the PIR motion sensor with the camera infrared illuminators positioned above the target area and out of a pig’s normal line of sight.

Feeders must reliably dispense a daily food source at the same time and quantity. If not, pigs could travel to an alternate food source and may not return to the bait site. Unconditioned pigs will appear nervous and tend to exit the bait site several times for no apparent reason. Conditioned pigs will appear more relaxed and tend to stay at the location until the bait is consumed. Comfortable pigs are often observed bedded or even nursing at the bait site. Step #1 has been accomplished when the entire sounder(s) has fed multiple nights in a row and are conditioned to trust the individual bait site as a daily food source. Only then will land managers have gathered enough intel needed to select the most efficient method, technology or trap size to “accomplish 100% sounder removal using the least amount of fuel, time and labor.”

Camera intel from step one already established the total number of sounders, individual sounder populations and juvenile-to-adult ratios. The mission now shifts from simply recording the data to actually planning and implementing the tasks necessary to efficiently kill or capture every pig on the property. The population dynamics and education level of each individual sounder will dictate the time needed to condition each sounder to trust the corral enclosure as a daily food source. The farmer did not drive a five-foot-long T-post against each leg of the feeder to secure and limit feeder damage. 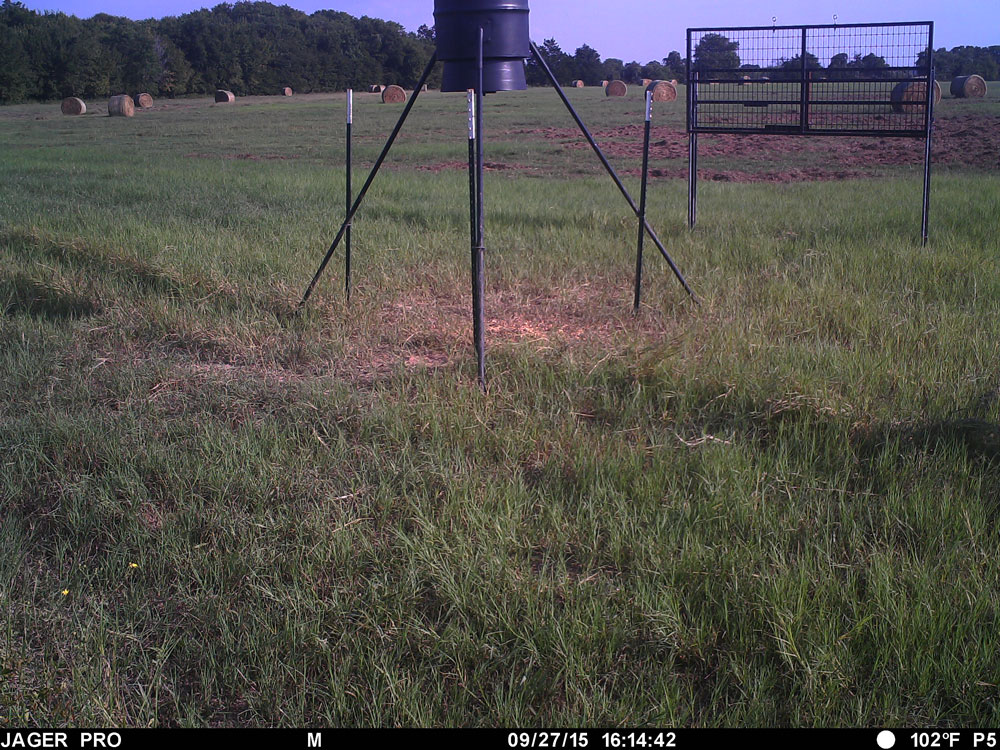 The opening for the M.I.N.E.® Gate should face the natural direction pigs travel to the bait site. Install gate with slide rails facing inside enclosure. Drive a seven-foot-long T-Post measuring 16 feet from feeder as left support post. Drive T-Post two feet into ground leaving five feet above ground. This will become the left support post for the eight-foot-wide M.I.N.E.® Gate. Place gate in position to measure location of right support post and drive another T-Post two feet into ground. Mark gate frame and threshold on ground with hand pick then remove gate. Trap resistant adult pigs will not step over a metal threshold, but the frame is necessary to add strength. Dig a two-inch wide by two-inch deep trench with hand pick to conceal gate frame and threshold then place gate back into position. Ensure the gate frame is level and square for consistent operation. Temporarily secure gate frame to a single T-post with 11-gauge steel wire. Cover gate threshold with dirt to blend with surrounding area ONLY AFTER Trap Panels have been fully erected. 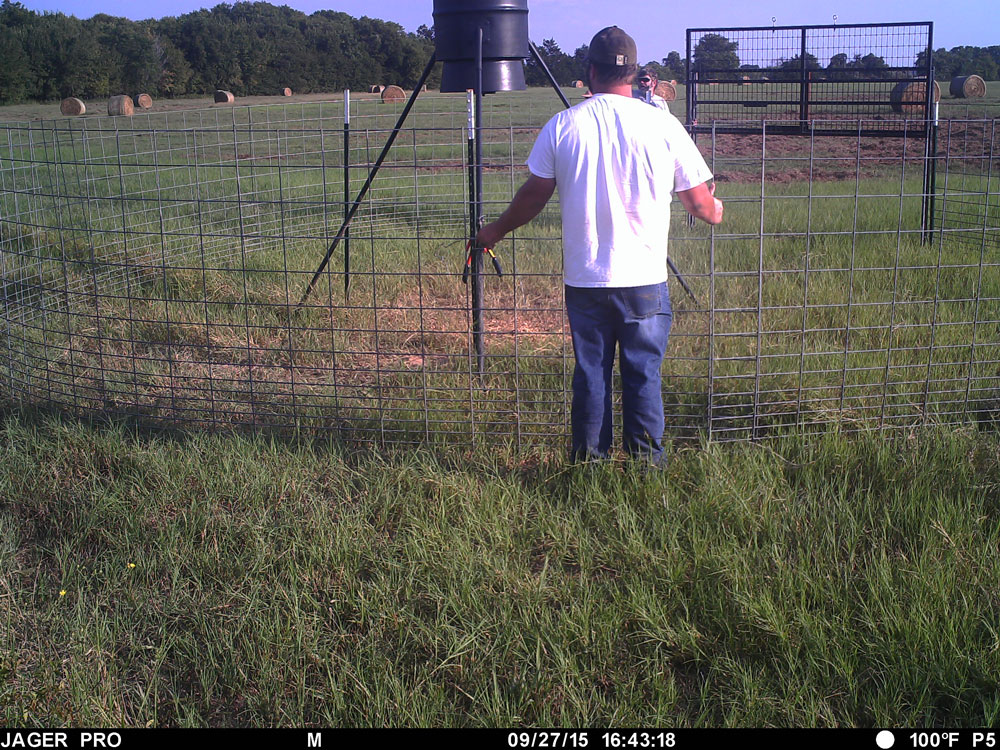 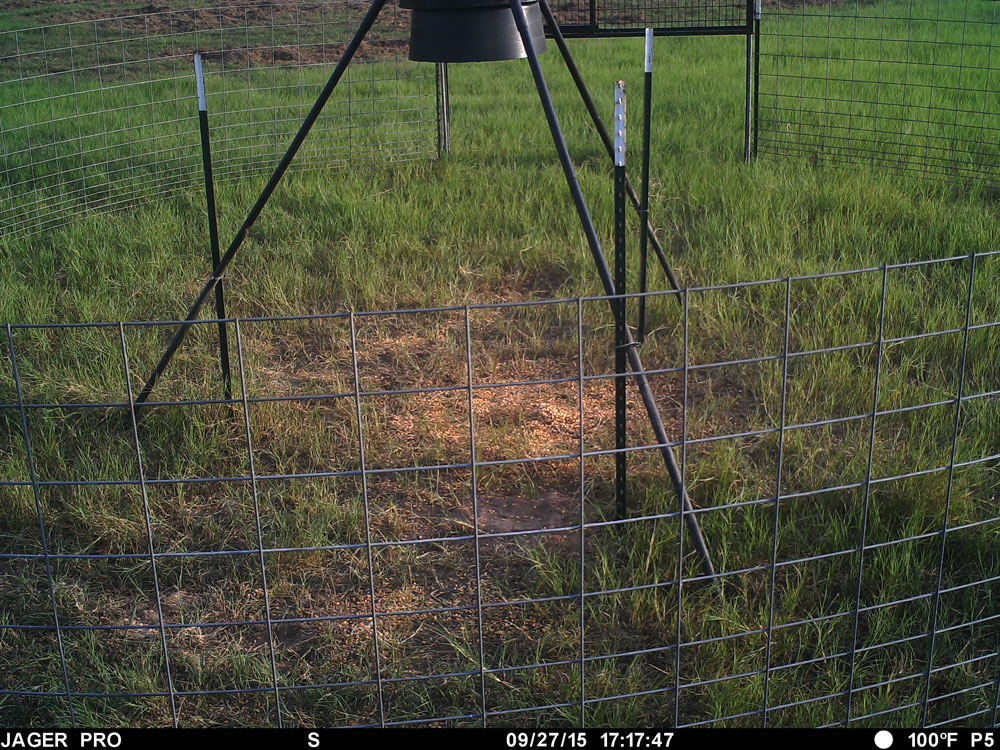 The task standard is to drive T-posts into the ground and secure the 18-60™ trap panels during the initial build to prepare for first night capture. The farmer did not erect trap panels to standard and did not select the proper camera distance or height outside the enclosure. 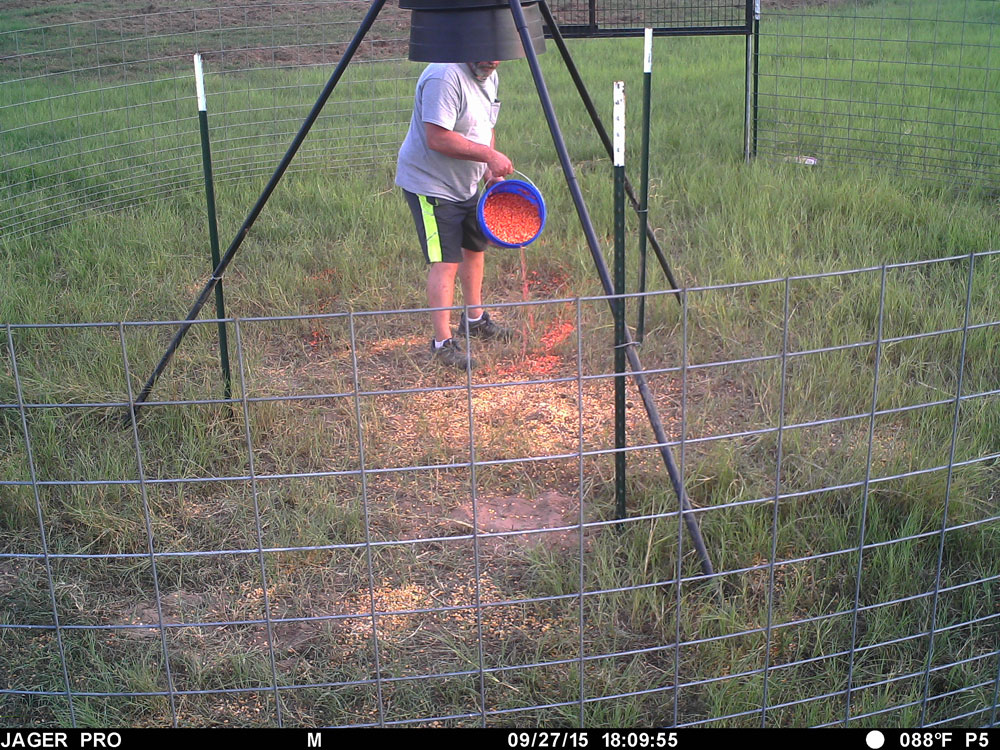 Never allow bait outside the trap enclosure once the panels are erected. Put a line of bait at the gate threshold to the feeder on the first night only. This allows juvenile pigs to feed with very little commitment. The tripod feeder should keep bait at least six feet away from the gate threshold and forces pigs to trust the trap center. It is only a matter of time before the entire sounder trusts the enclosure as a food source. Notice the time is 18:09 in this photo. 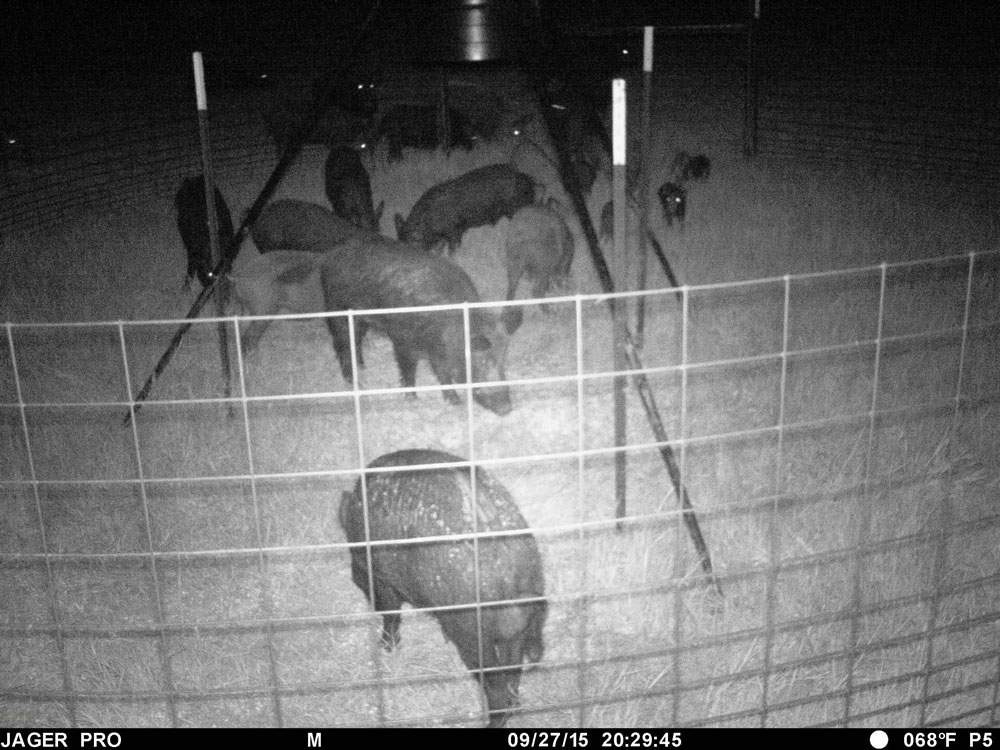 Adults began using the bait site at 20:29 which was less than 2.5 hours from initially building and baiting the trap enclosure. However, the farmer could not trigger the gate closed even if 65+ pigs were feeding inside the enclosure because the T-posts were not driven to secure the trap panels. 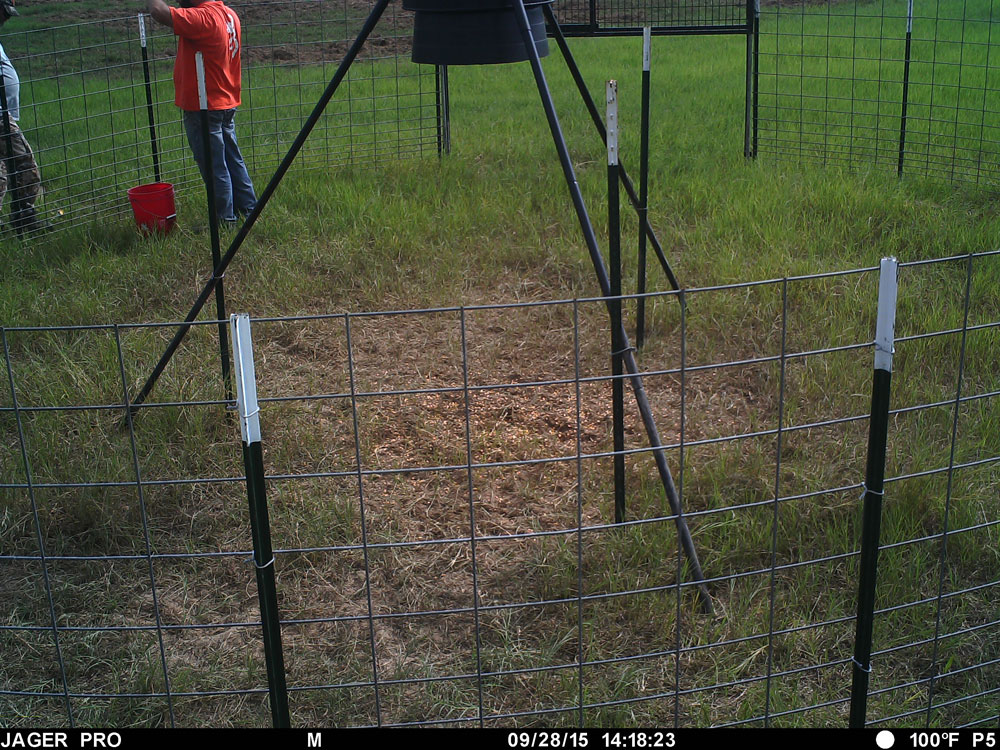 The farmer returned the next afternoon to finish building the trap enclosure. Start at one side of gate and position T-posts on outside of trap enclosure. Place T-post lugs towards panel every four feet (every nine panel verticals). Drive seven-foot-long T-posts (two feet into ground) in line at each panel vertical #9 and vertical #17 while centering T-post in middle of each eight-inch panel overlaps. Drive one T-post at a time and secure panel with T-post clip prior to positioning and driving the next T-post. Notice they finished erecting the M.I.N.E.® Trapping System at 14:18 on 28 SEP giving the area plenty of time to settle before dusk.

The final step is to implement the optimum trigger device for 100% capture of the entire sounder. Our Verizon and AT&T wireless cellular cameras with data plans send intel photos or video to any cellular device when the PIR motion sensor detects movement at the target location. Cameras are positioned opposite the trap gate to properly view pigs still outside the enclosure.

Remote control technology allows users to send text messages via a mobile app back to the camera to trigger the M.I.N.E.® Gate closed from their home or office. This equipment saves fuel, time and labor allowing 24-hour surveillance without wasting daily travel time and expenses to multiple bait sites. A human makes an educated decision to close the gate when the entire sounder is counted inside the enclosure via texted photo while the user is offsite in another location. This approach demonstrates whole-sounder removal in less than six days at most bait sites. The trap enclosure is left in the same location only if there was a second sounder at the feeder before erecting the trap enclosure. 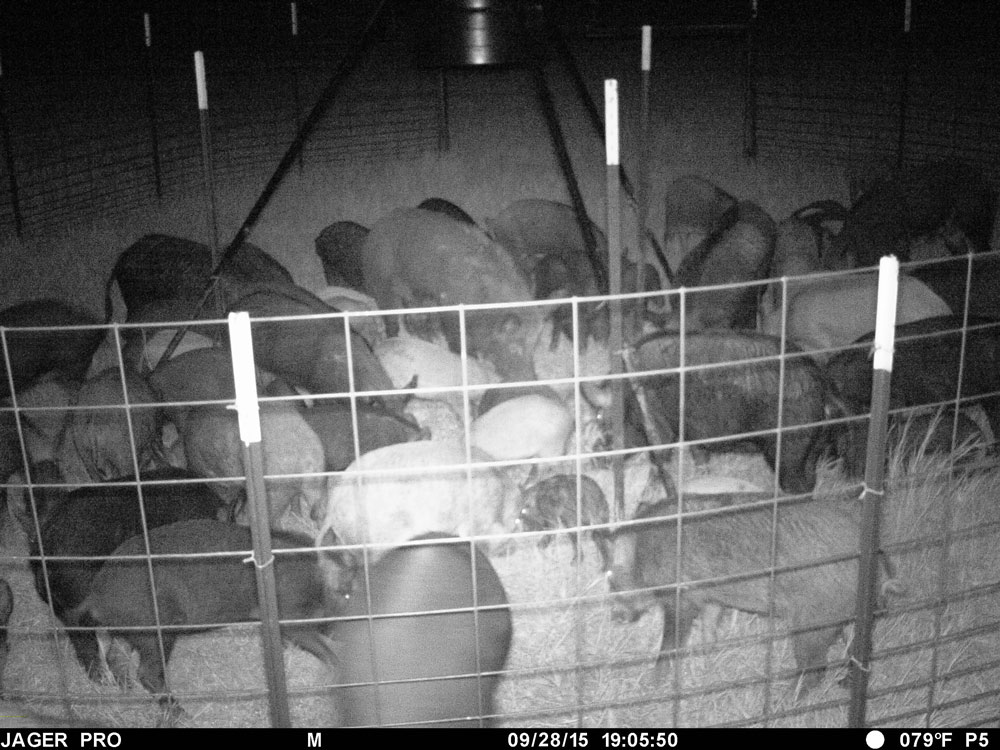 The entire sounder returned to feed at dusk. This photo at 19:05 displayed 60+ wild pigs inside the M.I.N.E.® Trapping System with no adults outside the gate threshold. The farmer triggered the gate closed using the JAGER PRO app.

The photo at 19:22 displayed the M.I.N.E.® Gate closed with a total of 69 pigs captured within 28 hours of building the trap enclosure. 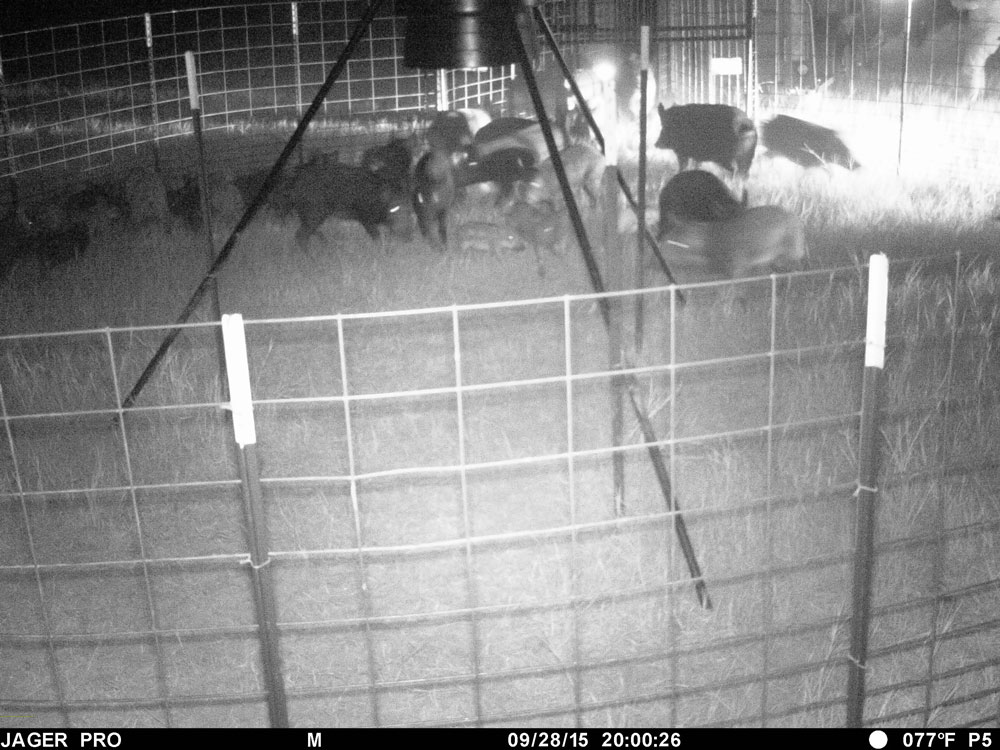 The farmer quickly arrived onsite with a livestock trailer and loaded the sounder by 20:00. In Texas, it is legal to sell wild pigs (by the pound) to designated buying stations for slaughter. 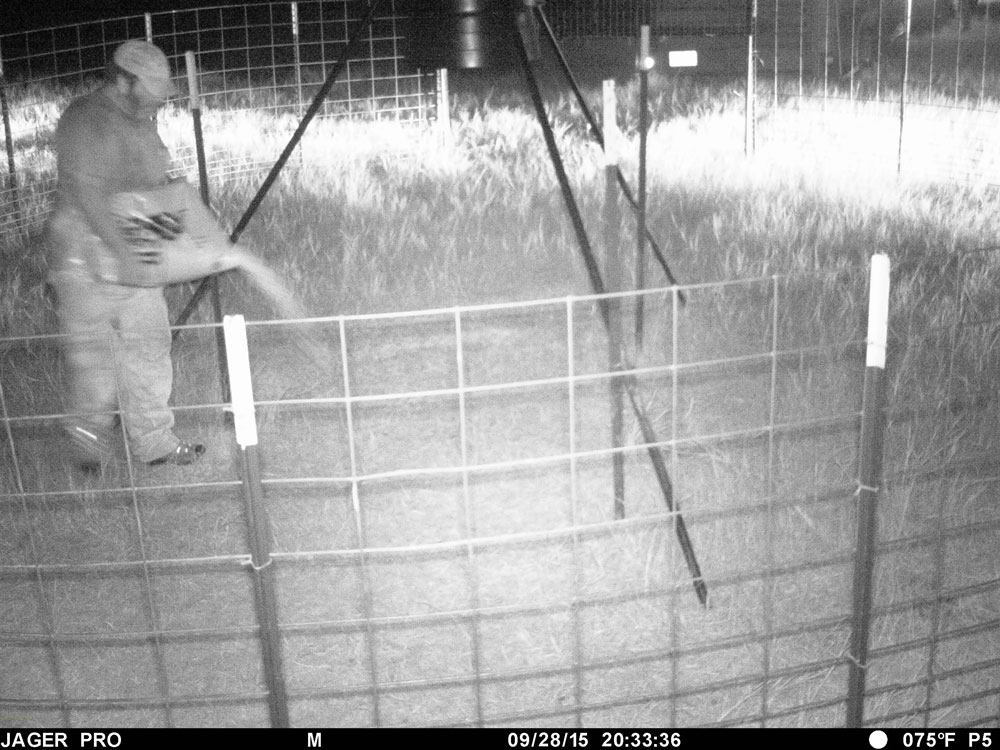 The farmer rebaited the trap enclosure with whole kernel corn to begin the conditioning process to capture another sounder damaging his hayfield. Note the time is 20:33 on 28 SEP 2015. 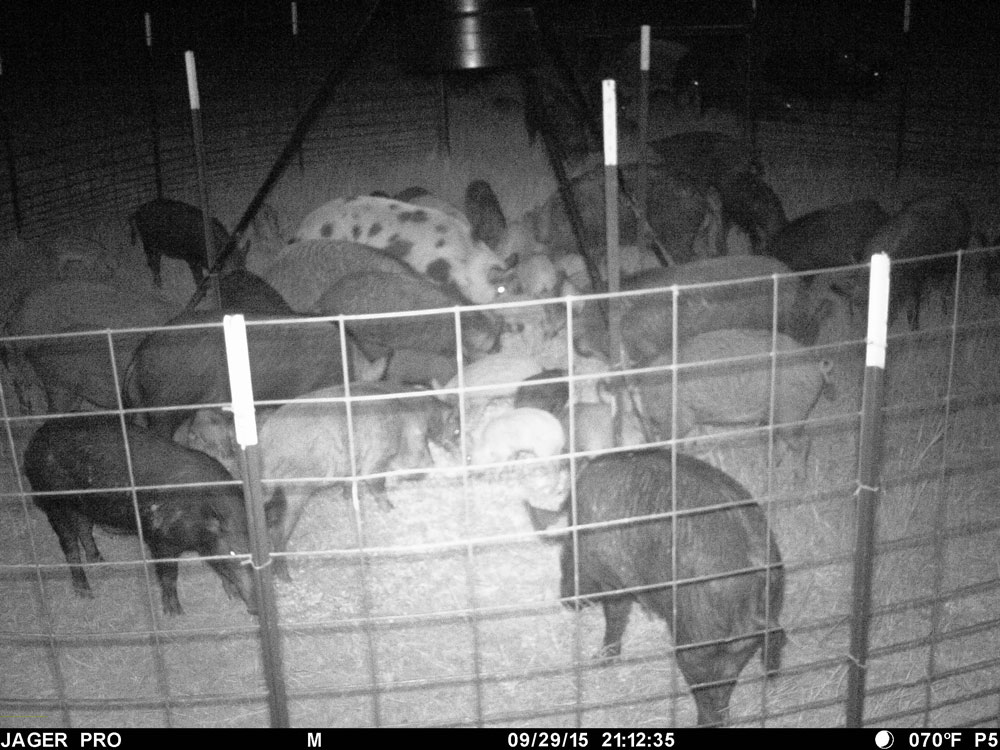 This sounder began filing into the M.I.N.E.® Trapping System within 24-hours of the previous capture. There is at least 20 additional wild pigs on camera standing outside the gate threshold. The farmer wisely exercised patience to condition the remaining pigs to trust the corral enclosure as a daily food source. 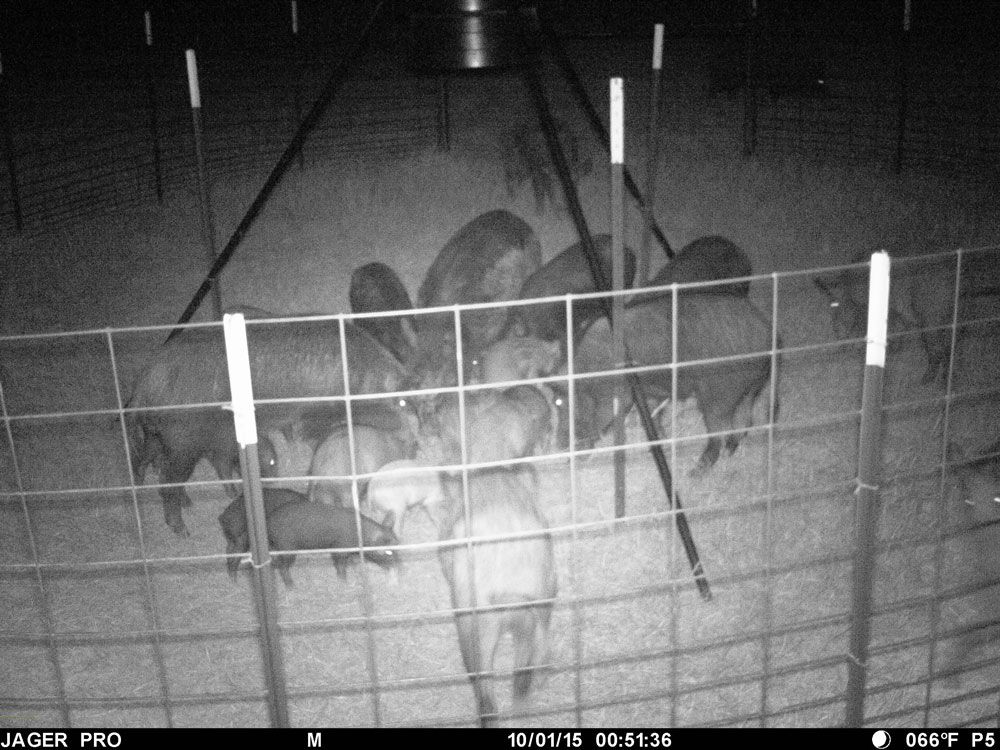 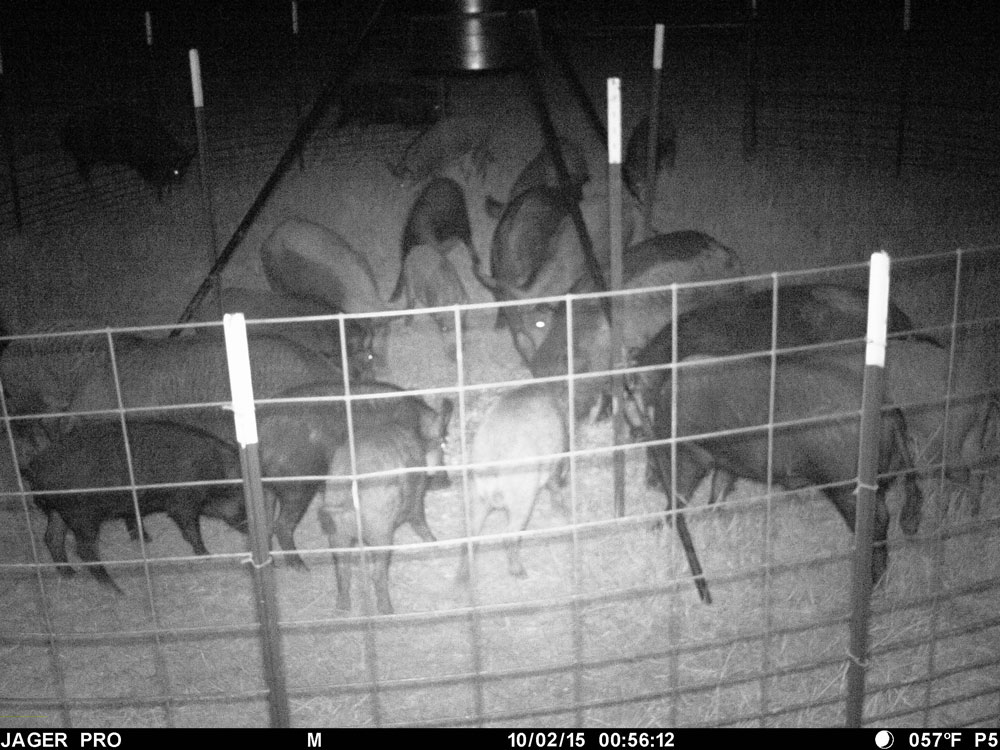 24 hours later… more patience to allow adults standing outside the trap enclosure enough time to trust the metal contraption as a food source. 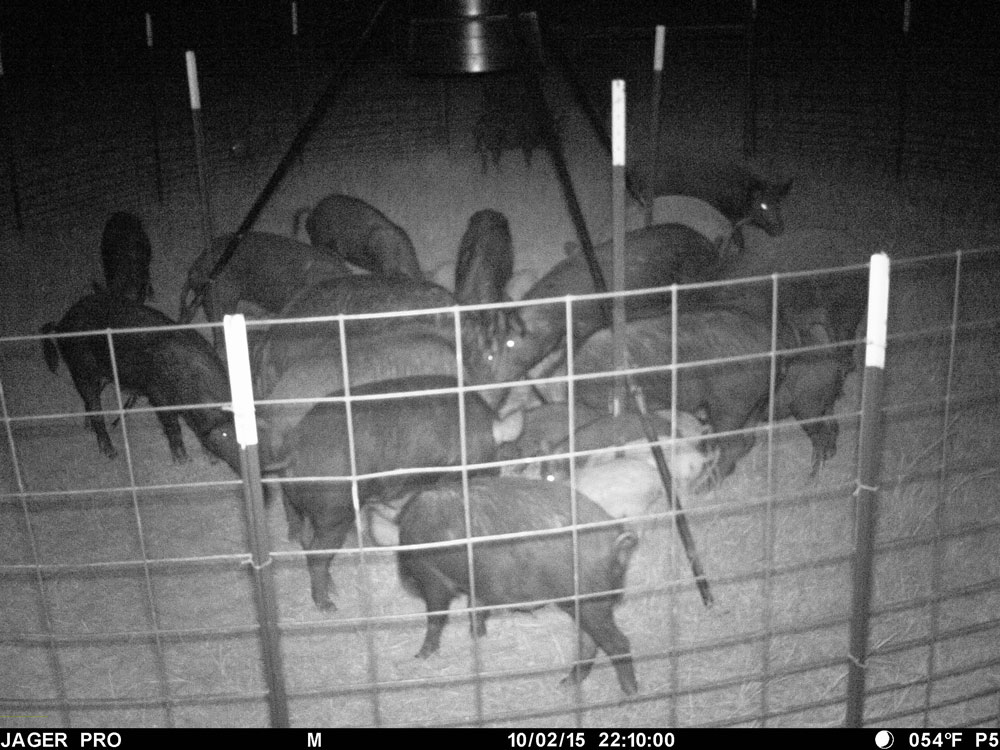 21 hours later and the farmer still had adults on camera standing outside the gate threshold. 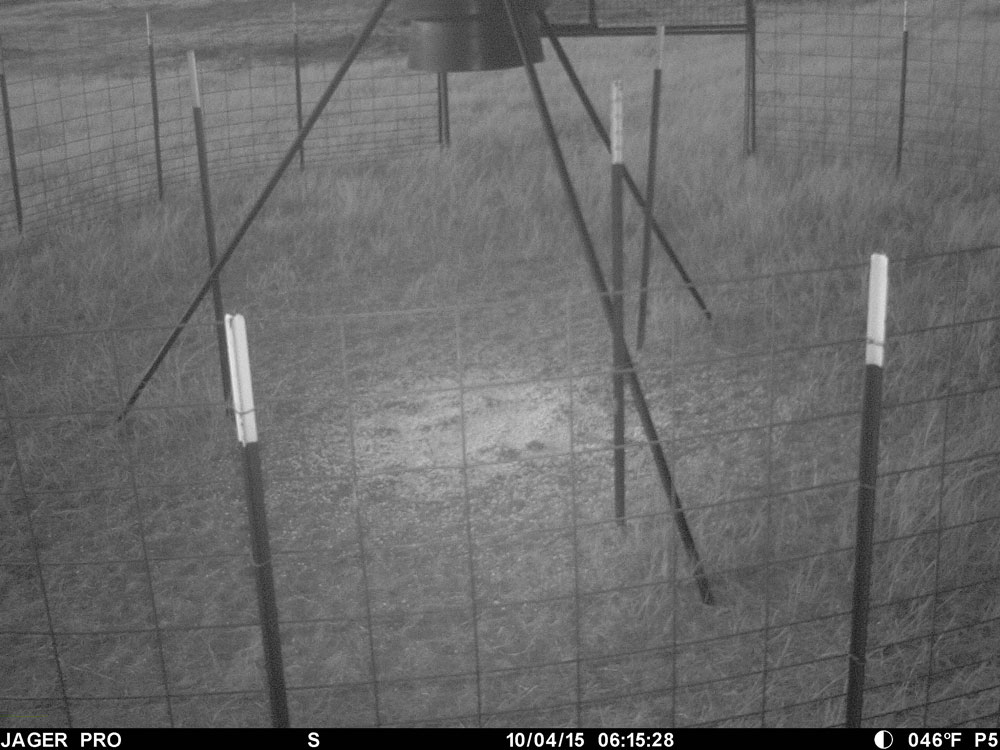 The sounder did not visit the trap enclosure to feed at all during the fifth night. 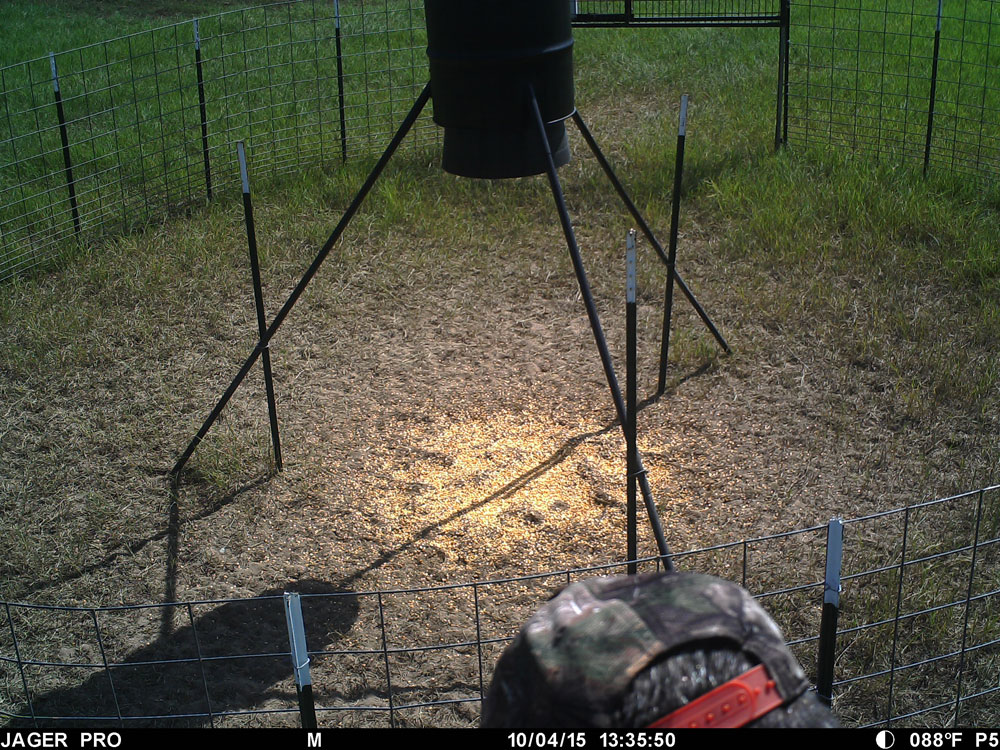 The farmer positioned the M.I.N.E.® camera higher with a perfect angle to view the entire trap and still see any movement outside the gate threshold. Notice the top of the photo running along the gate control box vertical creating the optimum intel photo. 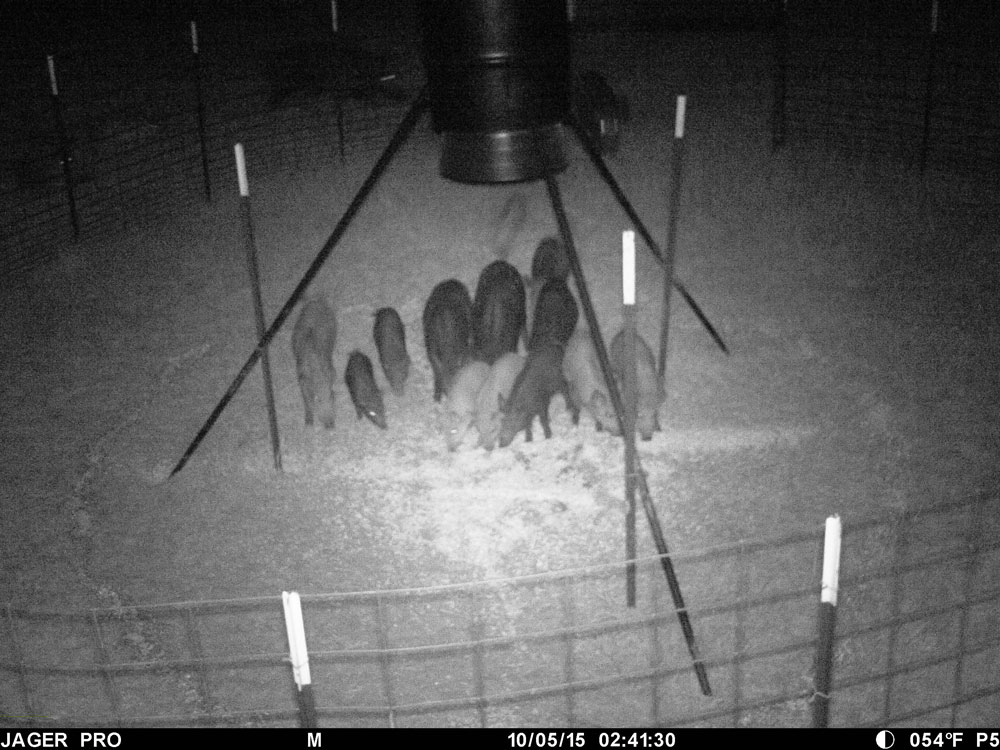 The first 15 pigs in the sounder began arriving at the M.I.N.E.® Trapping System at 02:41 in the morning. 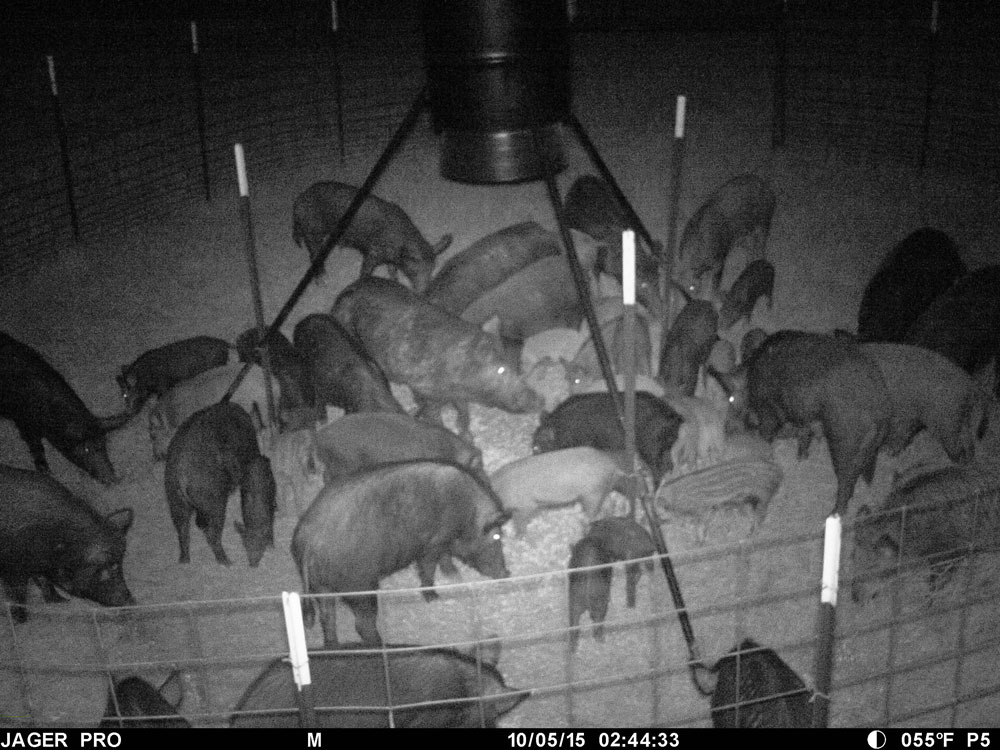 The next photo was received three minutes later at 02:44 and displayed 45+ pigs inside the trap enclosure with none standing outside the gate threshold. The farmer triggered the gate closed using the JAGER PRO app. 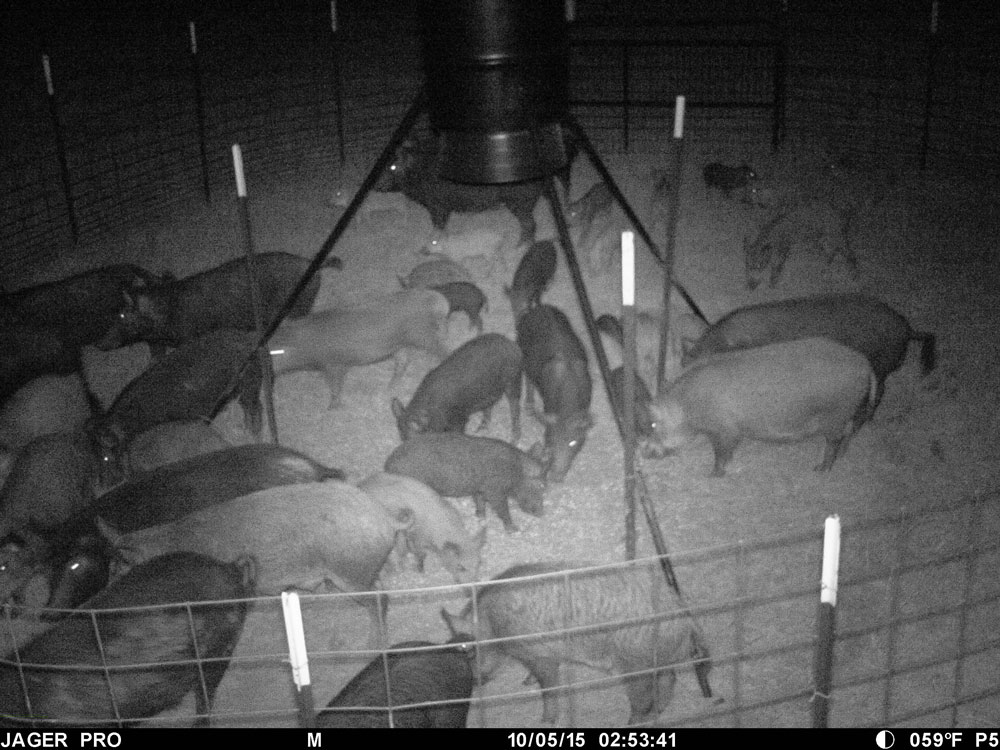 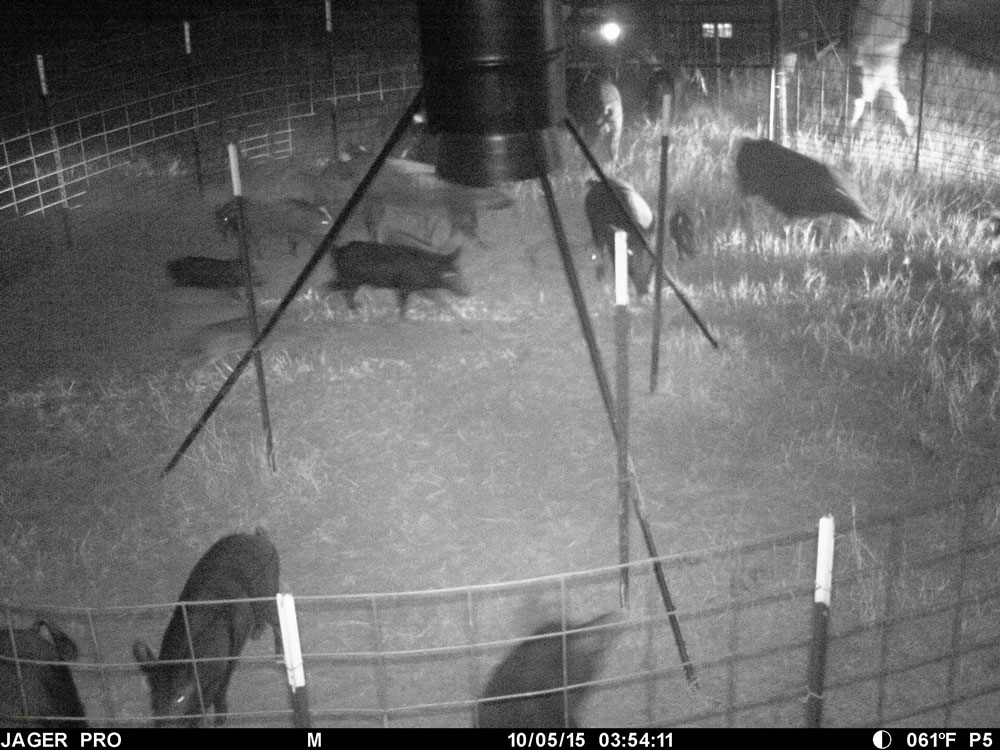 The farmer arrived onsite with a livestock trailer at 03:38.

This Texas farmer successfully removed 120 pigs from his hayfield in less than a week using the same M.I.N.E.® Trapping System. It has been academically proven that each feral pig produces $400 of annual economic damage harmfully impacting agriculture, native vegetation, vertebrate and invertebrate fauna, soil properties and water quality causing an annual negative impact of $2.5 billion dollars in the United States.

Therefore, this farmer will save himself and surrounding landowners $48,000 (120 pigs x $400) of economic damage during the next year from expending less than 10 hours of labor which equated to only five minutes of labor per pig. There are not very many tasks the American farmer may perform which requires so little labor and creates such a huge Return on Investment (ROI).