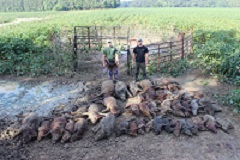 "Just wanted to say thanks for your help and for updating our control box. I was able to trap 43 hogs on the second night!! They were rooting up our cotton field and a neighbor's yard. I included a picture of our success."
Austin Morrell
Purchased the M.I.N.E. Trapping System - Florida 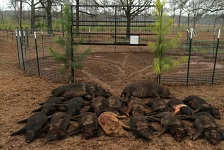 "Here is a picture from the last 6 weeks of 130+ hogs on one farm. We have been souring corn with sugar, yeast and grape Kool-Aid and boy does it smell good! Other than that, we have just been doing as the JAGER PRO staff has instructed! Camouflaging the M.I.N.E.™ Gate with a few pine limbs for weary hogs works well. Thanks!"
Paul Terwilliger
Purchased the M.I.N.E. Trapping System - Montrose, GA 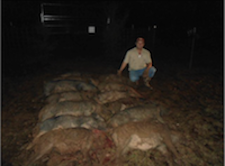 "I was impressed right away with the amount of research that the JAGER PRO team put into the process of trapping feral hogs. I watched many of their videos and made the choice to purchase their M.I.N.E.™ camera and gate. Within 3 to 4 days of purchasing the M.I.N.E.™ Trapping System, I successfully captured 15 feral hogs. It worked like a dream. It was so cool to get the picture, see the hogs in the trap and catch them with a simple command from my phone while sitting at my house. As you can see, they were later humanely dispatched. If you are considering purchasing this system, it is well worth the cost. We are looking forward to catching many more feral hogs in the near future."
Jeff Haney
Purchased the M.I.N.E Trapping System - Texas 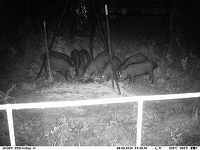 "We didn't take photos of the adults because we were in a hurry to get offsite. Also, I was at the beach on vacation three hours away with the good camera (Advantage of the JAGER PRO system!). I included a photo of the juveniles in the trap. They would enter early, eat, then sleep until the feeder timer tripped again at 4:00 AM. They were very comfortable in the trap enclosure. Thanks again for a quality product."
Jae Higgins
Purchased the M.I.N.E. Trapping System - Rock Hill, South Carolina 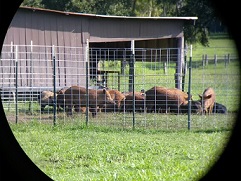 "I just purchased the MINE camera to go with my previously purchased control box. And my vendor, All Out Ranch Improvements out of Hallettsville, Texas are awesome (Joey is on top of the game!). My prior issue with the control box was immediately addressed and I thank you for the phone call. Totally not expected so quickly. This is a thrill for us as well as a better way to capture a sounder vs one or two and chase the rest. No need to waste ammo either. Proud to own a product that was designed by an American, built in America and the brain tech by an American! You Army guys! Pat on the back for all the hard work serving our country and coming home to be so creative thinking by developing the best thing for wild hog control." WE THANK YOU KATHEY!
Kathey Brown
Purchased the M.I.N.E. Trapping System - Texas 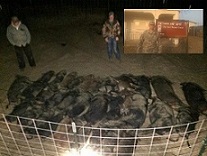 "We installed a JAGER PRO I.C.E.™ Camera and began conditioning feral pigs to a new bait site on 11 February 2015. On 12 February, the sounder of 35 pigs fed for nearly three hours and returned on 13 February for an hour. Our team installed a M.I.N.E.™ Trapping System the morning of 14 February 2015. Pigs fed inside the enclosure every night until the entire sounder of 35 finally committed on 18 February. I remotely triggered the gate closed with my cell phone internationally (11,763 kilometers away) from South Korea to the trap site in Samson, Alabama. Our Alabama team was immediately dispatched to successfully remove 35 feral pigs from the landowner's property."
Keith Owen
Closed the gate from 7,300 miles away - B&O Hog Control, LLC 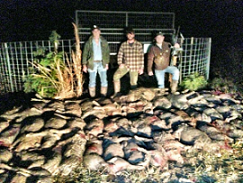 Father and son team Robert and Alan Summerford of Falkville, AL purchased a single JAGER PRO trap from Alabama Hog Control on Veteran's Day 2014. After prebaiting the area for about 3 weeks they setup the trap. And then they started trying to get all the pigs in the trap. While getting the entire sounder in the trap turned out to be a problem. The sounder was just too big. Finally, on Dec. 22nd Alan couldn't stand it any longer and dropped the gate. The rest of the evening was work because he had dropped the gate on 51 hogs in just one trap.
Robert and Alan Summerford
51 hogs in one trap - Falkville, Alabama

"I would like to thank you for a great experience. The night vision and infrared imaging technology you offered along with your immense knowledge on boar shooting provided myself and my shooting partner many opportunities to shoot boar. Fortunately for me, you spotted this 390 pound boar at 600 yards around 2:00 A.M. and the rest was history. Chances are I will never get another specimen like this, but I will be back next year to try."
Mark Detassis
First Boar Hunt - Owingsville, Kentucky

"Shooting with you put a whole new meaning on "Shooting Wild Boar". I have hunted big boars in Texas and have been fortunate to take a few animals, but always one at a time. While shooting with you I was privileged to shoot THREE boars over 275 pounds in one night! The largest weighed 318! In my 40+ years of hunting, I have never felt the excitement I enjoyed that night. Your thermal equipment is something everyone needs to experience at least once. The professionalism and knowledge you possess is second to no one."
Kyle Wilson
Berney Office Solutions - Midland, Georgia