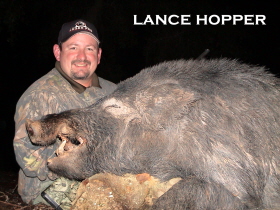 Lance Hopper served 20 years with the United States Army Marksmanship Unit (USAMU) and retired in 2008. During his career, he won a World Championship, six National Championships, and numerous Interservice Championships. He is a member of the President’s 100 and holds the Distinguished Rifle and International Badges.

Lance was one of the architects for the Army’s Squad Designated Marksman program and personally trained thousands of soldiers to apply and teach the skills needed to be more proficient marksmen. Upon his retirement, he was inducted into the U.S. Army Service Rifle Hall of Fame.

Lance became a JAGER PRO™ Thermal Hog Control Guide in February 2010 and currently holds the company guide record with 27 hogs in one night. He is a member of the U.S. Long Range Team and owns One Shot Accuracy, LLC. He is available for private and small group marksmanship instruction.